Alice in Wonderland Treasure Hunt Announced - Solve the Clues For a Treasure Worth Up To $20,000.00

With a booty worth somewhere between $10,000.00 and $20,000.00 USD, The Wonderland Treasure Hunt puts an interesting spin on a timeless classic. 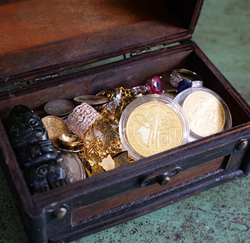 Somewhere in the North American wilderness...a treasure chest is hidden.

Somewhere in the North American wilderness, between Mexico and the Canadian border, a treasure chest is hidden. For the finder, a real world treasure awaits. It’s filled with gold, silver, and jewels, and it’s estimated to be worth between $10,000.00 and $20,000.00 USD. The man who hid the chest is David Jacobsen, author of the book “The Hatter’s Hat,” prequel to the celebrated, “Alice’s Adventures in Wonderland,” by Lewis Carroll.

“No one knows where the treasure chest is but me,” says Jacobsen. “But absolutely anyone can find it. There are hints and clues in my book, 'The Hatter’s Hat.’ If you can discover the clues and decipher their meaning, you can find the chest.”

The treasure chest itself is said to be filled with gold, silver, a beautiful ring with over one hundred and forty diamonds, rubies, sapphires, rare valuable coins dating all the way back to the third century Roman Empire, a 24 karat gold-plated Alice in Wonderland charm bracelet, and more. “I wanted the treasure chest to be visually spectacular,” says Jacobsen. “I wanted to create something that would awaken the childhood imagination. When you open up that treasure chest you’ll feel like you've just discovered a piece of history: Blackbeard’s secret stash or the loot of One-Eyed Willie.”

Inspired by books such as "The Thrill of the Chase," "Masquerade," and "The Secret," "The Hatter's Hat" seeks an audience among treasure hunting buffs and Lewis Carroll enthusiasts. “I didn’t want to write just any old book,” says Jacobsen. “I wanted to do something fun and interesting…I wanted to create an adventure that anyone could participate in.”

The price of gold, silver, and other real world treasures will fluctuate daily, says Jacobsen, but the value of the chest is estimated to range from around $10,000.00 to $20,000.00 USD, based on the original value of the contents therein.