Alicia Kali Wins Four International Stevie Awards In Less Than A Year, For Her Concussion Non-Profit, Celebrates On #Givingtuesday 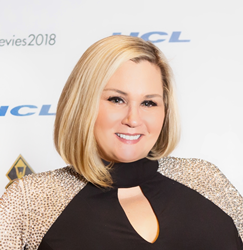 She created Purpose DRV’N while preparing for the launch of her company Panacea Biomed, as an enduring commitment, not only for research and education, but to help those less fortunate who suffer concussion, post-concussion syndrome (PCS), mild traumatic brain injury (MTBI).

Alicia Kali has been named the winner in three categories at the Stevie® Awards held on November 15, 2019 for her nonprofit Purpose DRV’N addressing those suffering from post-concussion and MTBI in those less fortunate. Kali won a Silver Stevie Award for Female Innovator of the Year, and for Female Executive of the Year, and Bronze Stevie for Organization of the Year in the 16th Annual International Stevie Awards for Women in Business. Kali has now won four International Stevie Awards in the last 12 months.

Kali, who has studied the brain and sympathetic nervous system for over 30 years is also a survivor of mild traumatic brain injury, having lived three years homeless with MTBI. Her patent work delivers answers for physical trauma to the head. She created Purpose DRV’N while preparing for the launch of her company Panacea Biomed, as an enduring commitment, not only for research and education, but to help those less fortunate who suffer from concussions, post-concussion syndrome (PCS), and mild traumatic brain injury (MTBI).

The Stevie Awards for Women in Business honor women and the companies they run- worldwide. The Stevie Awards have been hailed as the world’s premier business awards. Winners were determined by the average scores of more than 150 business professionals around the world, working on eight juries. Judges considered Kali based upon the most in depth, candid interview Kali has ever done, educating unknown truths about physical trauma to the head. The video can be viewed here: https://bit.ly/2nTrb5B.

More than 1,500 entries were submitted this year. Alicia Kali is a winner in the area of “Female Innovator of the Year”, “Female Executive of the Year” and “Organization of the Year” categories. Donations to Kali’s passion project can be made at http://www.PurposeDRVN.org. Kali’s product DRV’N Brain is also available for sale to the general public at http://www.DRVNBrain.com.

Kali is the Founder of Purpose DRV’N as well as Founder, CEO and Chief Scientist of Panacea Biomed, a neurobiologics company focused on neuroregeneration and gene expression, offers products for multiple sectors in health. Kali delivers work based on over 30 years expertise in the biochemical center of health; the sympathetic nervous system and brain that was once hailed as the most important discovery in the history of medicine, for the many answers it yields and its far-reaching benefits for generations to come. Kali was a 2018 Silver Stevie Award Winner in the Woman of the Year category for her work in Purpose DRV’N as well as a 2019 nominee for the prestigious Dr. Paul Janssen Award in biomedical research.

Details about the Stevie Awards for Women in Business and the list of finalists in all categories are available at http://www.StevieAwards.com/Women.