Dr. Hidemitsu Hayashi of The Water Institute of Japan Is Quoted in Today’s Bawell Report On The Benefits of Alkaline Water For The Body

The Bawell report lists the benefits of drinking alkaline water, as researched by Dr. Hidemitsu Hayashi, M.D. Director of the Water Institute of Japan. 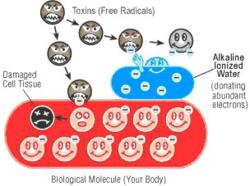 By having a safe supply of free electrons to obstruct the normal tissue’s oxidation by free oxygen radicals, alkaline ionized water is a major help.

The Bawell report explains the major role of alkaline water in maintaining one's health, and quoted Dr. Hayashi’s statement, "Because waste products such as hydrogen sulfide, ammonia, histamines, phenols, and indoles are toxic, the body's defense mechanisms try to eliminate them by releasing neutrophils... these neutrophils produce active oxygen, oddball oxygen molecules that are capable of scavenging disintegrating tissues by gathering electrons from the molecules of toxic cells."

"Problems arise, however; when too many of these active oxygen molecules, or free radicals, are produced in the body. They are extremely reactive and can also attach themselves to normal healthy cells and damage them genetically,” the doctor added. “These active oxygen radicals steal electrons from normal, healthy biological molecules. This electron active oxygen oxidizes tissue and can cause disease."

The Bawell review corresponds with Dr, Hayashi’s statement regarding how alkaline ionized water or water treated by electrolysis reduces this issue. As the Bawell report states, “By having a safe supply of free electrons to obstruct the normal tissue’s oxidation by free oxygen radicals, alkaline ionized water is a major help.” The report continued by quoting Young who explained, “Ionized water is the product of mild electrolysis which takes place in the ionized water unit...” A water ionizer review of the Ministry of Welfare of Japan states that reduced water obtained from electrolysis has the ability to hinder anomalous fermentation of intestinal microbes.

The Bawell report continues to cite Dr. Hayashi, "One way to protect healthy tissue from the ravages of oxidation caused by active oxygen is to provide free electrons to active oxygen radicals, thus neutralizing their high oxidation potential and preventing them from reacting with healthy tissue. There is no substitute for a healthy balanced diet, especially rich in antioxidant materials such as vitamin C, vitamin E, beta-carotene, and other foods that are good for us."

Further mentioning the alkaline water benefits, the doctor states, "Ionized Water inhibits excessive fermentation in the digestive tract by reducing indirectly metabolites such as hydrogen sulfide, ammonia, histamines, indoles, phenols and scatoles, resulting in a cleaner stool within days after reduced water is taken on a regular basis. Ionized Water quickly permeates the body and blocks the oxidation of biological molecules by donating its abundant electrons to active oxygen, enabling biological molecules to replace themselves naturally without damage caused by oxidation that can cause diseases."

The Bawell water ionizer company has been in the business of manufacturing this equipment for the past 10 years. With over 1,000,000 customers worldwide, Bawell has become the most trusted internationally recognized name in the alkaline water ionizer industry. Discover more about them by clicking here.