GlobalWeatherCycles Correctly Predicted Months in Advance the United States Would Have 6 Hurricane Landfalls in 2020– Strength of Each One – Where They Would Landfall. Preliminary 2021 Outlook Calls for Landfalls in More Populated Areas. Predictions are Released Annually in Late January for 11 United States Zones. 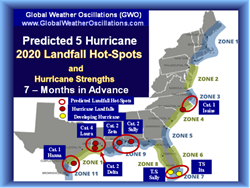 Is it unusual that GWO's predictions were that accurate in 2020? Not at all. Global Weather Oscillations and Global Weather Cycles, have been issuing accurate long-range landfall predictions since 2009. Professor David Dilley, senior forecaster and researcher for GWO - says that our predictions released 6-months prior to the events - pinpointed the landfall locations and strengths of all 17 hurricanes to strike the United States since 2016.

Processor Dilley says "for a preseason prediction to be meaningful - you must be able to tell people and clients - where hurricanes will make landfall. Predictions that merely tell you how many named storms and hurricanes there will be can be very misleading, and not informative or useful". Unlike most organizations, Global Weather Oscillations goes a huge step further by accurately predicting months in advance - where they will make landfall - and with what strength.

The following two examples show why predictions based only on how many named storms or hurricanes will occur in a season - can be very misleading. For a preseason prediction to be useful, you must be able to predict ahead of time where a landfall will occur - or if there will not be a landfall.

Then came the year 2010. The season saw 19 named storms and 12 hurricanes (double the normal). This was a very active season and. If some organization had accurately predicted the numbers, you would have expected a very destructive season for the United States. But again, prediction by numbers were very misleading - the United States only had one very weak tropical storm make landfall - no hurricanes. This is why GWO's accurate landfall landfall predictions are so important.

Professor David Dilley's 2021 hurricane zone predictions will be available on GlobalWeatherCycles,com and GlobalWeatherOscillations.com around late January. The predictions will tell you if your local zone have a hurricane or tropical storm - and if so- where it will likely make landfall, and with what strength. Predictions are derived from “ClimatePulse Technology” developed by Professor Dilley and based on natural electromagnetic rhythm cycles of earth-moon-sun interactions. The Natural ClimatePulse controls the position of the Bermuda High Pressure Center, ocean cycles, storm paths and hurricane landfall cycles.

Preliminary Outlook for the 2021 Hurricane Season.

The ClimatePulse Hurricane Model indicates that the United States is still a very active and very dangerous landfall cycle. Professor Dilley expects the 2021 season will have fewer Atlantic Basin named storms. Expect some hurricane landfalls to be in more populated areas than the 2020 season, and therefore the season will be .- more costly and destructive than the 2020 season. You can expect around 11 hurricanes - 5 United states landfalls - with at least 2 being major hurricanes. But numbers are meaningless unless you know where they will occur - and this is why GWO's zone predictions and webinars are so important.

Interactive Outlook Webinars in February 2021, weekly outlook webinars and tracking webinars beginning in May, Because GWO already knows where the 2021 Hot-Spots will be, the tracking webinars can provide 10 to 15 days prior notice of a landfall.