Pittsburgh-based Allegheny Health Network is offering patients with advanced melanoma treatment with an oncolytic (cancer-killing) virus called Imlygic or T-VEC. It is injected directly into the tumor, where it works by replicating inside the cancer cells. 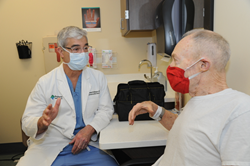 “Unlike other therapies for advanced melanoma, T-VEC is usually well tolerated and is suitable for many patients, including the elderly. It also has a “bystander effect,” killing nearby tiny lesions in addition to the primary tumor.” - Howard Edington, MD, AHN surgical oncologist

Paul Kirsch of Greentree, Pa. has always been a leader and a go-getter.

He’s a retired U.S. Marine and Reservist, teacher and administrator in the Northgate and Keystone Oaks school districts, and a former Keystone Oaks School Board member. He had his first job in sixth grade and worked post-retirement until he was 80, teaching education classes at a local college.
Now at age 87, Mr. Kirsch’s upbeat attitude and enthusiasm for life hasn’t waned.

The oncolytic (cancer-killing) virus is called Imlygic or T-VEC and is injected directly into the tumor, where it works by replicating inside the cancer cells. It also works as an immunotherapy, prompting the body’s immune system to fight the cancer.
T-VEC is FDA approved for Stage IIIB, IIIC and IV melanomas that cannot be fully removed by surgery. It can be used for cancers that are in or under the skin, or in lymph nodes. Because it causes few, if any, side effects, it’s well-suited for elderly patients.
Dr. Edington first removed melanoma from the back of Mr. Kirsch’s neck two years ago. When it re-emerged last year in his armpit, Dr. Edington, in consultation with AHN medical oncologist Christie Hilton, MD, suggested attacking the tumor with T-VEC.

The injections are given every other week for six months, or longer if necessary to control the tumor’s growth. Mr. Kirsch said he’s experienced no side effects, and feels only a small pinprick when he gets the shot. Better still, more than halfway through his treatment, Mr. Kirsch’s tumor has shrunk from the size of a large olive to the size of a nail on the little finger – so small that Dr. Edington says he has difficulty finding a spot for the injection.

Researchers have long considered how viruses might be used to fight cancer, and much research is ongoing in this area. T-VEC was the first FDA-approved oncolytic virus therapy, and Dr. Edington is one of only a few physicians in western Pennsylvania offering the treatment.

“We are happy to offer T-VEC to our patients whose advanced melanoma cannot completely be removed with surgery and who have few remaining options for treatment.” Dr. Edington said. “Unlike other therapies for advanced melanoma, T-VEC is usually well tolerated and is suitable for many patients, including the elderly. It also has a “bystander effect,” killing nearby tiny lesions in addition to the primary tumor.”

One study found that T-VEC completely shrunk melanomas in as many as 68 percent of patients, with response rates varying depending on the cancer’s stage
Melanoma is a form of skin cancer that is not as common as other types of skin cancer, but tends to spread more readily if it is not treated at an early stage. About 200,000 cases of melanoma are expected to be diagnosed in the U.S. this year, and about half of those will be invasive cancers. The five-year survival rate for melanoma that is detected early is 99 percent.
Early warning signs include any kind of new or changing mole, spot or lesion on the body.
“We recommend regular self-checks of skin, head to toe. Because melanoma can spread so quickly, any mark that doesn’t seem right should be checked by a physician,” Dr. Edington said.
About Allegheny Health Network – and the AHN Cancer Institute

Allegheny Health Network, a Highmark Health Company, is a western Pennsylvania-based integrated healthcare system that serves patients from across a five-state region that includes western Pennsylvania and the adjacent regions of Ohio, West Virginia, Maryland, and New York. The Network’s Cancer Institute employs more than 200 physicians and 500 oncology professionals who provide a complete spectrum of oncology care at 24 affiliated oncology clinics, including access to state-of-the-art technologies and new therapies being explored in hundreds of clinical cancer trials. The Cancer Institute has the only cancer program in the Pittsburgh region accredited as an Integrated Network Cancer Program by the American College of Surgeons Commission on Cancer, and its radiation oncology program is the largest in the country accredited by the American Society for Radiation Oncology. AHN Cancer Institute is a Quality Oncology Practice Initiative certified practice, and is accredited by the Foundation for Accreditation of Cellular Therapy, National Accreditation Program for Breast Centers and the National Accreditation Program for Rectal Cancer. AHN also has a formal affiliation with the Sidney Kimmel Comprehensive Cancer Center at Johns Hopkins, one of the nation’s 41 comprehensive cancer centers designated by the National Cancer Institute, for research, medical education and clinical services.