Cynthia Hundorfean, President and CEO of Allegheny Health Network (AHN), has been selected by Modern Healthcare magazine as one of 2020’s 100 Most Influential People. 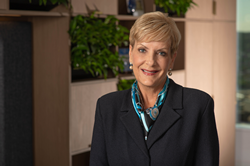 “Cindy is a remarkable leader, and the challenges of the last 12 months have certainly proven that,” said David L. Holmberg, President and CEO of Highmark Health, AHN’s parent organization.

Cynthia Hundorfean, President and CEO of Allegheny Health Network (AHN), has been selected by Modern Healthcare magazine as one of 2020’s 100 Most Influential People.

This prestigious recognition acknowledges and honors individuals who are deemed by their peers and the senior editors of Modern Healthcare to be the most influential leaders in the industry.

In being honored as one of Modern Healthcare’s 100 Most Influential People, Ms. Hundorfean joins prominent leaders from across the United States, including elected officials, government appointees, health system CEOs, insurance industry presidents, and representatives from retail health care.

The complete ranking can be found in this week’s issue of Modern Healthcare magazine, and a feature article and profiles of the winners are available at ModernHealthcare.com/100MostInfluential.

As a result of the COVID-19 pandemic, 2020 “is a year that reminded us of the importance of the frontline healthcare worker and the power of collaboration,” said Aurora Aguilar, Editor for Modern Healthcare. “Every member of this class found ways to help their organization or the government or each other maneuver through unprecedented hardships.”

Ms. Hundorfean and other honorees “influenced the course that healthcare took during a global pandemic, continued to press forward amid uncertainty, and used current events like the election and racial injustice as an inspiration to do better,” Ms. Aguilar said.

“Cindy is a remarkable leader, and the challenges of the last 12 months have certainly proven that,” said David L. Holmberg, President and CEO of Highmark Health, AHN’s parent organization. “This year has tested Allegheny Health Network and its caregivers in so many ways – operationally, emotionally, clinically, and strategically – but because of Cindy’s vision, and through the resilience and ingenuity of the team around her, AHN has led our region’s response to the COVID-19 pandemic.”

AHN is the Pittsburgh-based provider arm of Highmark Health, one of the country’s largest health insurers and one of its preeminent integrated health care organizations.

“We are thrilled that Modern Healthcare has identified Cindy as one of the nation’s most influential leaders,” said David Blandino, chair of AHN’s board of directors. “AHN, and the many patients and Western Pennsylvania communities this network serves, are fortunate to have her.”

Ms. Hundorfean joined AHN in 2016. As its president and CEO, she leads a 13-hospital, $3.5 billion health network with more than 20,000 employees and a service footprint that includes all of Western Pennsylvania, as well as portions of New York, Ohio, and West Virginia.

“I am honored to be included on this list,” Ms. Hundorfean said. “This award reflects the hard work and dedication of all AHN employees, who have helped to transform this organization and provide outstanding care for our patients even while responding to an unprecedented public health crisis.”

About the Allegheny Health Network: