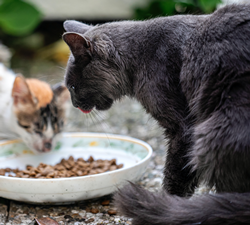 The letter argues for leniency for Alston and Roberts...and urges Ms. Tyrone and Wetumpka officials to explore the necessity of a city TNR program.

Alley Cat Rescue, Inc. (ACR) has sent a letter via direct Email to Wetumpka Alabama’s court magistrate, Kelly Tyrone, upon learning that two senior citizens have been arrested for helping the city’s community cats through trap-neuter-return and regular feeding.

As ACR President and founder, Louise Holton, explains in the letter, trap-neuter-return (TNR) is “the process of trapping, spaying/neutering, vaccinating, and then returning feral cats back to their outdoor homes. TNR is effective because it stops the breeding cycle of outdoor cats.” The letter further explains the benefits TNR has for communities by decreasing the number of feral cats over time, as opposed to attempting to remove the cats, which would actually only result in new groups of cats moving into the area to take advantage of the unguarded resources (a phenomenon known as the “vacuum effect"). TNR also benefits the cats, according to the letter, by preventing kittens from being born in perilous conditions and dying.

The letter also stresses the inhumanity in leaving cats in an urban environment to find sufficient food for themselves, saying, “TNR would not be a fully humane operation if it did not include some maintenance of the cats who have been sterilized and returned. While feral cats do find ways to subsist on their own in cities, they do so mainly by scavenging through litter and trash, and by drinking from dirty pools of water.”

The letter argues for leniency for Alston and Roberts, who were charged with disorderly conduct for disobeying officers and trespassing for feeding the cats on public property, and urges Ms. Tyrone and Wetumpka officials to explore the necessity of a city TNR program.

Holton ends the letter with an invitation to Ms. Tyrone to reach out to Holton for more information about TNR and feral cat management.

The full letter is available at saveacat.org/WetumpkaLetter.html.

Alley Cat Rescue is a national nonprofit organization dedicated to the welfare of all cats: domestic, stray, abandoned, and feral. ACR advocates for humane nonlethal control of feral cats. For more information, visit their website http://www.saveacat.org.