Alley Cat Rescue, Inc. (ACR) has completed a wide-spread online “Community Cat” survey of TNR groups and colony caretakers that shows a remarkable increase in TNR practices from 2012 to 2019. 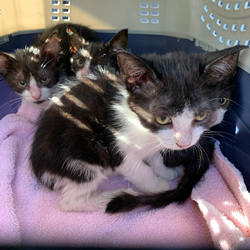 Alley Cat Rescue, Inc. (ACR) has completed a wide-spread online “Community Cat” survey of TNR groups and colony caretakers that shows a remarkable increase in TNR practices from 2012 to 2019. Survey data shows that the total number of community cats sterilized annually by respondents increased from 45,000 in 2012 to 62,000 in the most recent survey, which is an increase of about 4% per respondent.

The survey results have been analyzed by Animals 24-7, a nonprofit, independent online investigative newspaper and information service.

ACR’s most recent survey also reveals that extermination of colony cats is not an effective means of shrinking nor getting rid of colonies. Survey respondents who reported that animal control agencies had exterminated feral colonies in there area also reported that “39% were re-occupied by feral cats within less than a month; 71% within three months; 80% within five months; and 84% within six months” (Animals 24-7).

About Alley Cat Rescue: ACR is a national nonprofit organization dedicated to the welfare of all cats: domestic, stray, abandoned, and feral. ACR advocates for humane nonlethal control of feral cats. ACR has been awarded the Independent Charities of America’s “Best in America” Seal of Approval, and our newsletter has won several awards from the Cat Writers’ Association. For more information, visit their website http://www.saveacat.org.

Trap-Neuter-ReturnACR caught this feral cat in a humane trap. The cat will be sterilized and vaccinated by a veterinarian and then released back to its colony.