Alpine Beer Company is excited to announce the launch of OG Lemon Haze, its first year-round can release since the release of Nelson IPA in cans in 2019. OG Lemon Haze, a 6.5% ABV Hazy IPA is brewed with citrusy hops that boast beautiful lemon blossom, citrus and berry aromas with notes of fresh apple, peach and Meyer lemon peel. This beer is truly something special and a perfect addition to the Alpine line-up of world-class beers. 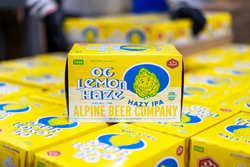 We are excited to bring this amazingly refreshing and flavorful beer to our fans. And we are looking forward to bringing additional new beers soon.

OG Lemon Haze was brewed for all the Hazy Hop Heads out there. The lemon and citrus flavors and aromas are all derived from brewing with citrusy hops, and there’s no fruit or flavoring added to this beer. OG Lemon Haze pours a bright hazy color with citrus flavors and tropical aromas bursting with every sip, finishing with super low bitterness. The packaging features a Hop Lemon Head at the forefront and is a slight departure from the core line-up designs. OG Lemon Haze will officially launch in March will be distributed everywhere Alpine Beer is sold throughout California, Arizona, Texas, Colorado, Nevada, Ohio, Pennsylvania, and Virginia.

OG Lemon Haze will be offered year-round in 6-pack 12oz cans and draft and also as part of the new Alpine Trail Mix Variety can 12-pack.