Alsamarol 2057 has released a new album titled “Not Just Jazz”

The 7 members of the band play a style of music they call ‘Raw Street Music.’ They are particularly thrilled because all songs in the new album were written and arranged by members of the group. 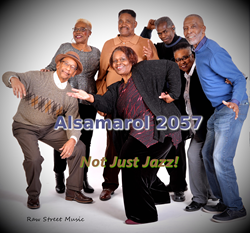 "Not Just Jazz" Now on sale!

From our hearts to your hearts.

Joining the band on this album is guitarist Jerry Ramos of Mercury Recording Studio in Rahway, and drummer-percussionist Mark Turner of East Orange New Jersey.

Alsamarol 2057’s ‘Raw Street Music’ is the blending and blending of Jazz, Blues, R&B, Soul, Gospel, with Latin and African flavor. Essentially, the band members say this music is “From our hearts to your hearts.”

“The band is fortunate to have so many experienced, talented, and skilled musicians,” said co-founded Samuel Clark. Sam also said, “If I wasn’t a member of this group, I would pay to see Alsamarol 2057 perform.”

“Not Just Jazz” is an album with instrumental and vocal songs. It has at least one song that nearly anyone would enjoy. The songs in the album are A Quito; Lonely People; Hero; Shadow Prints; That Day; Stood Me Up; Luigi’s Theme; Can’t Get Enough Of Your Love.

The song “A Quito” (a vocal song written by Samuel Clark and Robert Turner) was written in appreciation of the people of Ecuador. Sam was amazed and inspired by his unforgettable interactions with the people of Ecuador, and the unbelievable natural beauty he saw in the country. Edwina Sabrina Jones is singing the lead on A Quito, and Jerry Ramos is playing rhythm guitar.

A Quito and the other songs in the album can be purchased by going to the link below: https://alsamarol2057.com/music-store/

The song “Lonely People” (written by John Taylor, Samuel Clark, Robert Turner) is a jazzy swing vocal. Vocalist Denice Bradshaw has the lead on this one. We must mention the solid drum work of Edwina, and the inspiring bass lines of Ed Washington on this one.

“Hero” is a song (written by Robert Turner) about a little fellow who had a figurine he called Hero. Robert and Edwina are singing on this song.

“Shadow Prints” (written by Samuel Clark) is an up-tempo instrumental written in honor of a guitarist friend of Sam. Eva Marie Harris does an outstanding job on piano in this one.

“That Day” (written by Samuel Clark) is about the ending of a love affair. Vocalist Denice Bradshaw takes care of this one.

“Stood Me Up” is an up-tempo instrumental written by Samuel Clark. Sam is playing alto saxophone on this one, with a guitar solo by founder Allan Burnett.

“Luigi’s Theme” is an instrumental written by Samuel Clark, Robert Turner and Edwina Jones. It was inspired by the interactions with the management and patrons of Luigi’s Rancho of New Jersey. Robert Turner lays down a nice piano solo in this one.

“Can’t Get Enough Of Your Love” is an up-tempo vocal written by Robert Turner. Vocalist Denice Bradshaw is leading this one. The guitar solo is by Allan Burnett. And throughout this song and the entire album you can hear the percussion work of Mark Turner.

For additional information about the members of Alsamarol 2057, and to view their photos go to the link below: https://alsamarol2057.com/