Altman Solon 2020 Consumer Movie Survey finds "Movie Superfans" saw 60% of movies screened in U.S. last year, and half want to return to theaters now - even before the COVID-19 vaccine is available. This group is also streaming and watching movies through other sources at higher rates through the pandemic. 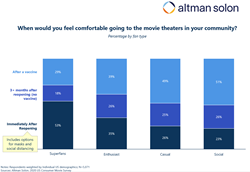 Our research shows that many movie fans are impatient to return to theaters. This bodes well for studios, which have delayed the release of several blockbuster films, and theater operators when they’re able to reopen their doors.

With most movie theaters closed and blockbuster premieres delayed, a new survey by consulting firm Altman Solon reveals that two-thirds of avid movie fans are ready to return to theaters—even before a COVID-19 vaccine is available. Altman Solon’s 2020 Consumer Movie Survey finds that these consumers historically watch 60% of all movies screened in U.S. theaters, signaling a potentially strong restart for box offices once social distancing restrictions are lifted.

“It has been assumed that direct-to-home or ‘premium video on demand’ movie releases during the pandemic, like ‘Trolls World Tour,’ would accelerate the trend of in-home viewing—which has been fueled by content, convenience, and continuing improvement in home theater technology,” said Altman Solon Partner Jonathan Hurd. “But our research shows that many movie fans are impatient to return to theaters. This bodes well for studios, which have delayed the release of several blockbuster films, and theater operators when they’re able to reopen their doors.”

The survey identifies 37% of the public as either “Movie Superfans,” those who spend “all their free time” watching movies, or “Movie Enthusiasts,” those who say movies are “very important” to them. Together these consumers watched 60% of all movies screened in theaters in 2019. About half of the Superfans say they will return to the theaters as soon as they open, while two-thirds of Superfans and Enthusiasts would visit a theater even before a COVID-19 vaccine becomes available.

The survey shows that Superfans/Enthusiasts are also prolific streamers, with 80% saying they “watch movies frequently” on streaming services. And 54% of these consumers say they are watching streaming video services more often since the pandemic started, compared to 33% of more casual moviegoers. About one-third of Superfans/Enthusiasts also say they are watching more movies on both cable TV and DVD/Blu-ray discs during the pandemic.

For the entire movie-watching population, video viewing increased across nearly all mediums during the pandemic, including streaming VOD (up 41%), basic TV (up 29%), premium TV (up 21%), DVD/Blu-Ray (up 19%), and online video purchases (up 19%).

“Superfans and Enthusiasts want to watch anytime, anywhere, and across nearly any viewing method,” said Altman Solon Director Patrick Redmond. “While the spike in COVID-19 cases in many states has already impacted the timetable, an eventual successful return of the movies will in part be determined by how movie studios, streamers, and theater operators connect with this critical user segment.”

There is also good news for the future of the theater: the majority of superfans/enthusiasts say they will watch movies at the theater the same or even more often than they did before the pandemic hit.

“There are many challenges that theater operators need to work through – from mask policies to seating reconfiguration – as they start to reopen responsibly over the next several months,” said Altman Solon Director Matt Rivet. “Obviously much depends on flattening the pandemic curve but there is potential for the movie industry to become even stronger in the future.”

Billion-dollar blockbuster movies typically fall into the genres of “Action & Adventure,” “Superhero,” or “Sci-Fi/Fantasy,” all categories that attract Superfans/Enthusiasts to the theaters at the highest rates, according to the survey. This means that pandemic-delayed tentpole films like “Wonder Woman 1984” and “Black Widow” could still see big openings outside of the summer blockbuster season. Overall, Superfans/Enthusiasts would prefer watching nearly all genres in the theater over home viewing, while more casual fans would rather watch all genres – except Action and Superhero – at home.

Other key findings of the survey, which tested an assortment of 250 movie titles, include:

The survey was led by Hurd, Redmond, and Rivet and conducted in late May 2020. More data and related charts can be found here. For questions on the survey please contact jonathan.hurd@altmansolon.com.

About Altman Solon:
Altman Solon is a global strategy consulting firm that works across the Telecommunications, Media, and Technology (TMT) sectors. Our consultants are united by passion and intellectual curiosity for TMT and work with market leaders, challenger brands, and investors in these industries.

Altman Solon was formed following a merger between Altman Vilandrie & Company and Solon Management Consulting in 2020, cementing a decade-long partnership across the Atlantic to form the world’s largest global strategy consulting firm with an exclusive focus on the TMT sectors. Altman Solon has an extensive international reach with around 300 employees based in Boston, London, Milan, Munich, New York, Paris, San Francisco, and Warsaw, with successful projects completed across more than 100 countries.