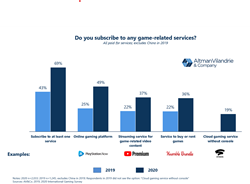 The video game industry is poised for another transformation as subscription services become more prevalent and interest in cloud-based gaming grows, according to Altman Vilandrie & Company’s 2020 International Consumer Gaming Survey. The report, which includes a comprehensive consumer survey of gaming habits in the U.S., China, Japan, South Korea, and the U.K., shows that nearly seven in 10 global gamers pay for a game-related subscription service, and nearly half say they plan to try a cloud-based gaming service in the future.

“Consumers have shown that they’re willing to support new business models that have been trialed across the industry,” said Jon Wakelin, Principal at Altman Vilandrie & Company. “Mobile and cloud technology are enabling new ways for users to interact with games, and we’re seeing that play out in changing consumption patterns. This disruption is likely to accelerate as the underlying technology improves and providers embrace the change.”

While these new platforms are gaining traction and mobile continues to drive the majority of industry growth, Console and PC sales are projected to lag the overall market growth. Consoles and PC are projected to grow by only 2.9% and 3.6% respectively by 2025, compared to 8.0% for Mobile. But the Altman Vilandrie & Company survey shows that although early, Sony is well positioned to continue its lead into the next generation when the PS5 and Microsoft's Xbox Series X are released this year.

Analysis of the survey data reveals that, despite being early in the Stadia’s adoption process, Google and other major cloud gaming providers should benefit from growing consumer interest, with 45% of U.S. and U.K. gamers saying they will try Stadia. Survey respondents did flag some concerns that may suppress Stadia’s growth, including the pricing model and a limited library of games.

“What Google has shown is that the technology can work, and we’re seeing signs that consumers see the advantages of cloud-gaming and are willing to embrace subscription-style payments. Ultimately, a successful cloud-based gaming service needs to have ubiquitous availability and device compatibility, a Netflix-style subscription model, and a compelling content library,” said Altman Vilandrie & Company Director Swope Fleming. “New cloud-gaming initiatives from Microsoft and Nvidia should serve as an incremental step function in that direction, and we expect Google to augment its offer to keep pace.”

Fleming noted that Altman Vilandrie & Company’s simulations show that by bolstering the content library and adopting a Netflix-esque pricing model (higher than the current $10 per month for Stadia Pro), Stadia could increase adoption by a third over current levels. Overall, gamers are ok to pay: Altman Vilandrie & Company’s survey finds that 85% of gamers are willing to pay for games, but there’s an overwhelming shift to a preference for microtransactions and subscriptions over a steep upfront cost of a console or for $60 games.

Survey respondents owned Sony’s PlayStation 4 at more than twice the rate of Microsoft’s Xbox One (59% vs. 27%, respectively). Sony’s lead is currently trending to continue with next-gen consoles: Of those aware of the next-gen launches, 45% of respondents plan to purchase the PS5 as opposed to 22% who plan to purchase the Xbox Series X. However, Altman Vilandrie & Company expects these figures to increase as marketing campaigns raise awareness of each console.

“While Sony enjoys an early lead in next-gen console interest, there’s still plenty of opportunity for Microsoft to turn the tides,” said Altman Vilandrie & Company Principal Laurence Wong. “Console gamers from our survey placed the greatest importance on the technical capabilities of the hardware itself and the content library available on the platform, so compelling exclusive content and thoughtful unique console features and functionality will likely determine market adoption for both consoles.”

Gaming is an increasingly important factor in consumers’ decision-making process for home internet. Sixty-five percent of gamers stated that their gaming needs are a factor in choosing their home broadband package, and 61% stated they would be willing to pay more for “gamer quality” Internet. Of those who were willing to pay more, the average willingness-to-pay was $8 more per month for Internet that would support their gaming needs.

“As digital storefronts continue to be the preferred channel to purchase games and the richness of games, DLC, and patches increases, broadband becomes increasingly important for a positive customer experience,” said Wakelin. “That’s good news for the internet service providers who are continuously upgrading their networks and looking for returns on those investments.”

The survey finds that mobile is the dominant gaming platform, with mobile users growing at 7% annually. In 2020, 51% of mobile gamers report that they play while traveling or commuting, up from 30% in 2019.

“Mobile gaming is unquestionably the juggernaut in the market right now, and with 5G roll-outs we’ll likely see this trend continue,” said Fleming. “All of the signs we’re seeing from consumer behavior suggest that gaming will increasingly rely on telecom infrastructure like edge cloud compute and broadband networking to provide a best-in-class experience.”

eSports create synergies not just for games, but for real-life sports

Altman Vilandrie & Company’s survey found that gamers who watch an eSport end up playing 2 more hours of the underlying game per week opposed to non-watchers. Additionally, of those who watch an eSport based on a real-life sport (e.g., NBA 2K, FIFA, Madden), about 50%-75% of these gamers state that they watch more of the real-life sport because of their affinity for the correlated eSport.

Led by Wakelin, Wong, and Fleming, Altman Vilandrie & Company fielded the online survey in January 2020 to more than 2,500 respondents (from U.S., U.K., China, Japan, and South Korea) provided by Dynata.

Additional key portions of the analysis, as well as charts and sources to support the findings, are available here. More survey results, including detailed country-breakdowns and on eSports, will be released this spring. For more details on the survey please contact gamingsurvey@altvil.com.