The 10th Annual Altman Vilandrie & Company survey on consumer video habits shows "channel surfing" now split between streaming services and pay TV. The survey also shows what content matters to viewers in the age of too much TV, including differences between men and women, and younger and older viewers. And "Stranger Things" is a top must-have program for all ages. 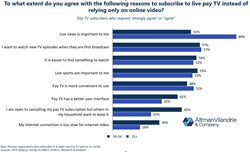 Younger viewers have propelled streaming services (51%) to a slight majority lead over pay TV (49%) for the preferred program surfing medium.

The decades-old tradition of unplanned “channel surfing” is now evenly split for viewers between streaming services and Pay TV, according to the 10th annual survey of consumer video habits conducted by Altman Vilandrie & Company. The survey also reveals what viewers want to watch – and why – in the age of “too much TV.”

The survey of nearly 5,000 U.S. consumers reveals that 64 percent of viewers 55 and older choose pay TV as at their preferred source for what has been historically called “channel surfing” source. In contrast, 66 percent of younger viewers (18-34) choose streaming services for “unplanned viewing” or what could now be called “program surfing.” Overall, the younger viewers have propelled streaming services (51%) to a slight majority lead over pay TV (49%) for the preferred program surfing medium.

Still, a majority (53%) of pay TV subscribers indicated they continue to subscribe to pay TV because “it’s easier to find something to watch” than online video. This ease of unplanned viewing – known as “lean-back” factor – was the third highest rated rationale for pay TV subscription, trailing only “live news and sports” (54% for younger viewers, 52% for older ones) and the importance of watching new programs “when they are first broadcast” (57%).

“The fact that more people now program surf online reflects the sea change in the TV industry,” said Altman Vilandrie & Company Principal Matt Rivet, who co-directed the survey. “While this is good news for streaming services, the networks and pay TV still have content that viewers want, including live news and sports and scripted shows. Pay TV providers still have a built-in advantage of being easier to use and more familiar to most consumers.”

Gender, Age Differences in Selecting “Must-Have” Programming
Respondents were asked to choose their “must-have” programs (e.g., drama, comedy, reality, news, sports) from a list of 225+ popular programs from network, cable, and streaming services. Overall, live news/weather and sports led the top choices, with scripted programming also performing well. Reality shows were scarce among the top must-have choices. The results also vary greatly based on age and gender of the respondents:

“The diverse preferences among the various viewer demographics create challenges in bundling channels,” said Altman Vilandrie & Company Principal Patrick Redmond, who co-directed the survey. “This is why virtual or digital MVPDs are bulking up their skinny bundles and looking more and more like their traditional counterparts in pricing and content.”

Altman Vilandrie & Company fielded the online survey in August 2019 to more than 5,000 respondents provided by Dynata. In 2019, the annual consumer video survey analyzed the impact of collections of specific programs on pay TV adoption and viewing.

Additional key portions of the analysis as well as charts to support the findings are available here. For more details on the survey please contact videosurvey@altvil.com.

Ninety percent of the boutique firm’s operator clients are large- to mid-cap companies including service providers, technology and software developers and media companies. Altman Vilandrie & Company’s financial clients include many of the largest and most prominent investors in the telecom, media and technology markets. Learn more at http://www.altvil.com.

About Dynata
Dynata is the world’s largest first-party data and insights platform. With a reach that encompasses 60+ million consumers and business professionals globally, and an extensive library of individual profile attributes collected through surveys, Dynata is the cornerstone for precise, trustworthy quality data. The company has built innovative data services and solutions around its robust first-party data offering to bring the voice of the customer to the entire marketing continuum – from strategy, innovation, and branding to advertising, measurement, and optimization. Dynata serves nearly 6,000 market research, media and advertising agencies, publishers, consulting and investment firms and corporate customers in North America, South America, Europe, and Asia-Pacific. Learn more at dynata.com.