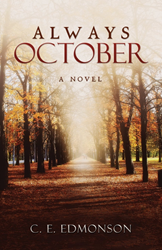 I had difficulty believing ‘Always October’ was fictional because Lucas Taylor’s nostalgic narration seems too realistic, too personal, to be otherwise.

The book takes readers on an emotional journey through the eyes of Lucas Taylor, an ailing veteran who mulls over his memorable life living in rural Minnesota. He tells how his ancestors came to settle in Minnesota, and recalls why his happy childhood drastically changes at age eight with the outbreak of the Spanish Flu epidemic in 1918. It claimed the lives of numerous persons, including his mother and sister. Lucas assisted his father selling farm machinery, but when World War II erupted, he enlisted. The horrors of war also changed his outlook on life, while struggling to survive and protect the lives of the men he commanded. After returning home, Lucas experiences other highs and lows of economic and social conditions that war left behind, romance, and more unexpected sorrow that constantly surrounds him.

Edmonson vividly paints scenes that are historically accurate as well as captivating. “I had difficulty believing ‘Always October’ was fictional because Lucas Taylor’s nostalgic narration seems too realistic, too personal, to be otherwise. It definitely proves how talented C. E. Edmonson is at story telling,” says one Readers’ Favorites reviewer. “The story was true to life and scarily real,” says another reviewer. “It was honest and pure without being cheesy or cliché. I don’t say this about many novels, but this one is pure gold.”

Edmonson was inspired to write the book after spending years visiting his mother in a senior care facility. “Every day I’d walk past a gauntlet of elderly faces, each one had lived a lifetime, each one had stories to tell, each one just wanted someone to listen,” Edmonson said. “The wealth of their wisdom and experiences is incredible, yet sadly too often ignored.”

‘Always October’ can be purchased through local and online bookstores, as well as through eBookIt.com.

For more information and for publicity contact, visit http://www.ceedmonson.com. Review copies are available upon request.

About the Author
Award-winning writer C. E. “Chuck” Edmonson grew up deep in the heart of Texas where he developed a respect for the past and a passion for the people that inspires many of his novels.