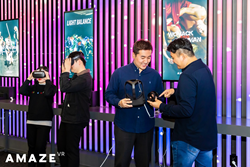 AmazeVR, a premium, cloud-based platform for high-quality VR content production and distribution, today announced that it has secured $2.5 million in additional Series A funding, bringing its A round total to $9.5 million. The additional funds were added by two strategic investors. Partners Investment, which has significant experience investing in entertainment companies, and YG Investment, a subsidiary of YG Entertainment which manages top K-pop artists and operates a record label, talent agency, music production company, event management and concert production company, as AmazeVR continues to build out the industry’s leading VR content and distribution platform as well as expand into offline channels.

AmazeVR has also soft opened its first offline VR experience ahead of the official launch in Incheon International Airport in Seoul. Created in partnership with Golden Tree Investment Advisory, Amazing Square is an 11,000 square foot enclosure that will serve as a getaway for busy travelers taking the airtrain to Terminal 1. The carefully designed space includes meditation areas and relaxing VR experiences sourced from the Amaze platform to help travelers feel rejuvenated and entertained. A one-of-a-kind performance stage will feature life-like immersive performances from recognizable musicians for those who want to feel like they are face-to-face with their favorite artist in a 6DoF interactive experience. In addition, an indoor kids’ playground will be integrated as well. This will include animated VR content that can serve as a delightful relief to kids and parents alike as children are free to run and play on long travel days.

“As leaders in the online VR consumer market, one of our key objectives is to broaden our distribution and expand capabilities towards immersive experiences offline as well,” said Steve Lee, CEO of AmazeVR. “Through this location-based hub at Incheon International Airport, we can expose an untapped market not just to the great content that AmazeVR produces, but also to the wonders of VR in general. Our investors recognize this and have deep connections within the music and entertainment industries, which will help us develop unique VR experiences with even more incredible content that will extend VR adoption globally.”

Amazing Square is AmazeVR’s first foray in location-based entertainment, which will create a powerful new distribution channel for AmazeVR’s industry-leading content. The company is expanding its location-based distribution across the U.S., working with major record labels and music management companies for immersive artist experiences.

AmazeVR has focused heavily on developing premium content in its first phase of growth, with an emphasis on interactive entertainment in order to draw in larger consumer audiences. To this end, the company has announced several marquee partnerships, including deals with two of the top immersive entertainment studios, Atlas V and Felix & Paul Studios, as well as distribute experiences with the ultramodern LED dance-performance troupe, Light Balance, best known for its “golden buzzer-winning” performance and top-three finish on America’s Got Talent. The company now offers the industry’s largest content library, and with its latest partnerships and funding, it is well positioned to continue adding outstanding VR content with broad audience appeal.

Amazing Square is the next step in AmazeVR’s push to expand the reach of VR content to a global consumer base. Incheon International marks the perfect first offline location, with the appetite for VR content in Seoul reaching a high as Korea sits at the forefront of the impending global release of 5G.

Airports around the world have been working towards creating more entertainment and relaxing environments at their terminals for travelers facing long layovers. Singapore’s Changi airport is a prime example, with its recent $1.3 billion expansion set to include movie theaters, attractions and dining experiences. Incheon International Airport is the largest airport in South Korea. Approximately 5 million passengers pass through Incheon each week, ensuring massive exposure to virtual reality and laying the groundwork for many more such ventures in the future.

About AmazeVR
Founded by a team of seasoned technology leaders, AmazeVR offers an end-to-end VR content service. The company shares its platform and technology with passionate creators and various partners.

With custom equipment/tools, proprietary software, and a hands-on team, Amaze develops, curates, and produces VR content for those who want to be a part of the next wave of content creation. AmazeVR content is distributed through all major VR stores. The company is backed by Mirae Asset Group, LG Technology Ventures, Timewise Investment, and Smilegate Investment. It is based in West Hollywood, CA. Learn more at https://www.amaze.us/.