A sustainability assessment of ayahuasca vine (Banisteriopsis caapi) conducted in the Peruvian Amazon by Medicine Hunter in 2018 has been published. The study, Ayahuasca Vine Harvesting In The Peruvian Amazon, is the first of its kind to assess wild harvesting and cultivation of the vine. 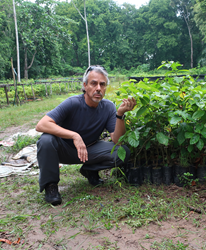 “Various entities, from academics to media, have speculated on the supply of ayahuasca vine, without no surveys or real data to support their positions.” - Chris Kilham, Medicine Hunter

A sustainability assessment of ayahuasca vine (Banisteriopsis caapi) conducted in the Peruvian Amazon conducted by Medicine Hunter in 2018 has been published as the feature article in HerbalGram, The Journal Of The American Botanical Council, issue 120 November 2018. The study, Ayahuasca Vine Harvesting In The Peruvian Amazon, is the first of its kind to assess wild harvesting and cultivation of the vine in the Ucayali and Loreto regions of Peru. Information gathered in both January and June of 2018 shows that ayahuasca vine supply is sufficient at present, but that cultivation is necessary for future viability of the plant and its use in the increasingly popular ritual psychoactive potion ayahuasca, which is legal in Peru.

“Various entities, from academics to media, have speculated on the supply of ayahuasca vine without surveys or real data to support their positions,” says Chris Kilham,“This ayahuasca field study provides an informed snapshot of the ayahuasca situation in Peru, based on the contributions of a great many people involved with this medicine.”

The ayahuasca sustainability study was conducted by Medicine Hunter founder and ethnobotanist Chris Kilham and Sergio Cam of Chakarunas Trading Company, with whom Kilham has conducted expeditions for 20 years. Other team members included boat captain Jaime Baca, agroforestry student Kleylie Vargas, and Amazon guide Juan Maldonado. The project was sponsored and funded by Medicine Hunter, which has no commercial ties to ayahuasca.

Ayahuasca, a psychedelic brew made by Amazonian shamans for millennia, is employed for healing and divination. Over the past fifteen years ayahuasca has become globally popular, and has been featured in virtually every news outlet of significance. Touted by celebrities including Chelsea Handler, Gerard Butler and Sting, ayahuasca’s popularity has spawned a boom of travelers to the Amazon to experience the effects of the medicine. The popularity of ayahuasca has stimulated concern about the viability of the two plants typically used to make the brew, ayahuasca vine and the leaf of chakruna (Psychotria viridis). Ayahuasca use in other parts of the world has driven demand for the brew, and this puts pressure on wild populations of the plants, most notably the vine, which must grow for a minimum of five years before it can be used. Up until the Medicine Hunter study, no surveys have assessed the supply of these plants.

A lack of data has not stopped some media outlets from making unsubstantiated claims regarding the supposed endangerment of ayahuasca vine. As recently as January 24 2017, a Guardian article claimed that ayahuasca is endangered, based on discredited claims made by a defunct NGO back in 2015. The group, Ethnobotanical Stewardship Council (ESC), was forced to disband due to its exercise of scare tactics to drive membership and funding. Claiming that ayahuasca was critically endangered, the NGO initiated the “SaveAya” campaign, which suggested that the supply of the vine in the wild was critically endangered. No studies of any kind supported this claim. Claims of this type have persisted.

In the study, Kilham and team visited growers, harvesters, shamans and traders, to glean insight into the supply of ayahuasca vine specifically. The team concluded that supply is currently sufficient to meet demand and that increasing numbers of people are cultivating the vine in anticipation of future shortages. Exports of the brew will continue to put pressure on wild supply of plants, and cultivation of vine is essential for future viability of the ayahuasca scene.

“With the growing interest in and use of the Amazonian vine ayahuasca in the multi-plant preparation of the same name, for ritual and religious purposes in South America and in other countries, it is reasonable and necessary to raise questions regarding the impact that increased demand has on its native plant population,” says Mark Blumenthal, Founder & Executive Director, American Botanical Council, “To our knowledge, no previous research has yet been published on this issue. The American Botanical Council is deeply grateful to Chris Kilham for his pioneering efforts to initiate an inquiry on the sustainability of harvesting of wild ayahuasca in its native habitat. This article will very likely become a seminal reference for future publications on this highly compelling and ecologically-relevant subject.”

The three-fold purpose of Medicine Hunter Inc. is to promote natural, plant-based medicines, to protect the natural environment, and to support indigenous cultures. The company was founded by Chris Kilham an ethnobotanist, author, educator and TV personality who has conducted medicinal plant research in over 45 countries and lectures worldwide about holistic wellness and botanical medicines. Kilham has worked extensively in the Amazon rainforest for 21 years, and is author of The Ayahuasca Test Pilots Handbook, The Essential Guide to Ayahuasca Journeying. Kilham and his wife Zoe Helene, known for her work with “psychedelic feminism” regularly lead groups to the Amazon to experience ayahuasca, but do not derive income from this activity.

Based in Austin, Texas, and with members in 81 countries, ABC is an independent, nonprofit research and education organization dedicated to providing accurate and reliable information on herbs, teas, medicinal plants, essential oils, fungi, etc. for consumers, healthcare practitioners, researchers, educators, industry, the media, and others. 2018 is ABC’s 30th year in operation. HerbalGram, The journal of The American Botanical Council, is regarded as the premier educational journal for botanicals. ABC is also the managing partner of the ABC-AHP-NCNPR Botanical Adulterants Prevention Program, a large-scale program to educate members of the herbal and dietary supplement industry about ingredient and product adulteration; and the Sustainable Herbs Program. ABC’s web site is HerbalGram.org. Contact: Denise Meikel, denise(at)herbalgram(dot)org

NOTE ABOUT THE PHOTOGRAPHS

These expedition photographs are for use free of charge in support of articles and interviews that are specifically about this project. All photos must be clearly credited. Higher resolution versions of the images included with this release, plus many others from the expeditions, are available upon request.