Amber Live!, the little drag-queen-talk-show-that-could, reaches its 1 year anniversary and 52 straight episodes of streaming from a drag queen’s basement in Vermont

Streaming from the basement of drag queen Amber LeMay’s pandemic hideaway in Burlington, Vermont, Amber Live! will celebrate it’s one year anniversary and 53rd show on March 21st. Amber Live! continues to attract an amazing array of interesting and famous guests from around the world who want to be interviewed by host Amber LeMay. 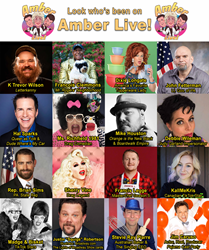 Look who's been on Amber Live!

What the hell else are ya gonna do right now? - Amber LeMay

Streaming from the basement of Amber LeMay’s pandemic hideaway in Burlington, Vermont, Amber Live! will celebrate it’s one year anniversary and 53rd show on March 21st! Never missing a week, the little drag-queen-talk-show-that-could has been streaming every Sunday night with a lineup of interesting and famous guests, and fans are loving it. As Amber likes to say, “What the hell else are ya gonna do right now?”

When the pandemic began, Amber LeMay, who normally lives at the Hot Damn Trailer Park in Beaver Pond, VT, was trapped in the basement of alter ego Bob Bolyard.

To fight the boredom of lockdown, Bob and Russell Dreher teamed up to figure out how to create an artistic outlet for themselves online. Russell started out behind the scenes producing the show from his Astoria, Queens apartment, while Amber put her relaxed Vermont charm to work on the guests.

Amber Live! has seen an impressive roster of guests, including

As the weeks passed, Amber’s guests have come from all over the United States as well as Canada, Mexico, the United Kingdom, and even Australia. Even with the ability to reach around the globe, Amber still strives to bring on a variety of Vermont residents, so as to share the quirky culture of Vermont with the world.

Over time the show’s cast has grown to include a number of regulars.

Amber Live! can be viewed live on Sunday nights at 8 PM ET at AmberLive.tv or YouTube.com/AmberLive.

Look who's been on Amber Live!