This new feature spotlights a public figure whose Catholic faith plays a meaningful role in life and work. 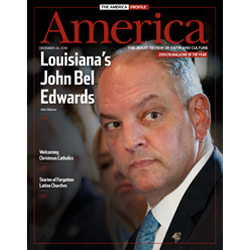 America Media announced today the subject of its inaugural “America Profile,” John Bel Edwards, governor of Louisiana, who is a lifelong Catholic and a Democrat in a largely Protestant and Republican state. The “America Profile” will become an annual year-end editorial feature written and reported by Father Matt Malone, S.J., editor in chief of America.

The debut of the “America Profile” comes at a crucial time for U.S. Catholics and the nation at large. “The public square is a less hospitable place for overtly religious points of view than it was a century ago,” says Father Malone. “As a result of this cultural shift, U.S. Catholics are asking just what role their faith can and should play in their public lives—rightly intuiting that faith should have a place in public life, while also acknowledging that we live in a pluralistic, democratic society.”

With the launch of this new annual editorial feature, America will continue to lead the conversation at the intersection of faith and culture by offering readers an in-depth look at a notable public figure whose Catholic faith plays a meaningful role in his or her life and work.

“It is more important in our toxic political climate to stress what is positive, to look at people who might serve as role models for Catholics in public life,” says Father Malone. He adds that whether one agrees with everything the governor has said or not, “John Bel Edwards appears to be basically what he says he is: a faithful Catholic who is trying to bring his religious principles to bear in a job that requires equal parts principle and pragmatism. That is not easy.”

In the cover story, which appears in the Dec. 24 issue of America, Governor Edwards talks openly about his long-shot 2015 election win, as well as his hard-to-classify track record. He is anti-abortion, pro-Second Amendment, pro-L.G.B.T civil rights, and pro-social safety net—not to mention a Democrat in an increasingly red state.

He also speaks of being inspired by his constituents, who are more than simply voters or statistical abstractions. As his neighbors and his guides, they have taught him that “you cannot be great if you’re not first good. Your policies have to be rooted in basic goodness.”

A video interview featuring Father Malone and Governor Edwards can be watched online at http://americamagazine.org/video/edwards.

ABOUT AMERICA MEDIA
America Media is the leading provider of editorial content for thinking Catholics and those who want to know what Catholics are thinking. America Media leads the conversation about faith and culture by producing excellent, unique, relevant and accessible content across multiple platforms. Our contributors are the principal figures in the American church; the decision-makers and opinion leaders who lead the ecclesial and civic debate about religion, society, politics and the arts. Those with something to say to the American church say it in America: popes and presidents; Nobel laureates; Pulitzer Prize winners; world-renowned scholars; and distinguished men and women of letters. Our flagship magazine, America, has been published continuously since 1909, making it one of the oldest periodicals in the United States today.