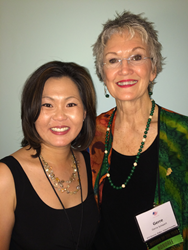 Being a mother is a tough job on it’s own; taking on additional responsibilities to the community at large, as these mothers have, is something we think should be applauded.

American Mothers, Inc.®, a national non-profit dedicated to honoring and supporting mothers around the world, is proud to announce Gerre Schwert as the 2014 National Mother of the Year, and Heidi Lin Kim as 2014 National Young Mother of the Year (given to those 40 and under). The honorees were announced Saturday night at the 79th annual American Mothers National Conference at the Broadmoor Hotel in Colorado Springs.

Schwert, from Chattanooga, Tennessee, has devoted her life to serving the poor and sick. She is a certified social worker who focuses on mind-body skills and journaling at the Center for Mindful Living in Chattanooga. She has also served cancer patients as an oncology specialist. Gerre has six children and ten grandchildren in her blended family. Her daughter, Ree Drummond, is a nationally renowned blogger, television host and chef, also known as the “Pioneer Woman.”

Kim, from Aiea, Hawaii, is a working mother and prolific volunteer. Besides raising her three children, she’s also a founding board member of Move Oahu Forward, and deeply involved with March of Dimes, Girl Scouts, American Diabetes Association, and the Kamehameha Schools parent leadership team.

“Each of these ladies has shown extraordinary devotion to their families as well as their communities,” says American Mothers Inc. President Joan Braitsch. “Being a mother is a tough job on its own; taking on additional responsibilities to the community at large, as these mothers have, is something we think should be applauded.”

Both honorees will serve as ambassadors for American Mothers, focusing particularly on the organization’s goal of raising awareness and funds for domestic abuse victims nationwide.

The Mother of the Year award has been handed out annually since 1935, when Sarah Delano Roosevelt presented Lucy Keen Johnson from Georgia as the first American Mother of the Year. The awards seek to honor women who show extraordinary passion and courage in their service to their children, families, and communities.

Extensive profiles of the honorees will be featured on the American Mothers blog, located at http://www.americanmothersblog.com. To lean more about American Mothers, and the Mothers of the Year from each of the 50 states, please visit http://www.AmericanMothers.org.

Gerre Schwert, the 2014 National Mother of the Year

Heidi Kim, the 2014 National Young Mother of the Year