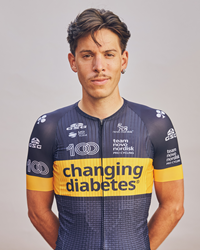 Logan Phippen was diagnosed with type 1 diabetes in 2016 over the weekend of his 24th birthday.

“Moving up to the pro ranks always means a new level of responsibility both as an athlete and as an ambassador to the diabetes community. I love getting to see Logan and Lucas’s dreams come true," said Team Novo Nordisk CEO and co-founder Phil Southerland.

“Moving up to the pro ranks always means a new level of responsibility both as an athlete and as an ambassador to the diabetes community. I love getting to see Logan and Lucas’s dreams come true,” said Team Novo Nordisk CEO and co-founder Phil Southerland. “Through our extensive development pipeline, many of our athletes have a shared journey up to the pro ranks. When a devo rider advances to the pro team, it is a reunion with their past teammates. They help one another with the adjustments while serving as a reminder of the hard work and dedication it takes to reach the pro team.”

To become a member of Team Novo Nordisk, all athletes must have type 1 diabetes. Since its launch in December 2012, the organization has focused heavily on identifying and developing endurance athletes worldwide with diabetes. Dauge and Phippen are two in a long line of riders advancing through the team’s development pipeline. The team’s multi-tiered structure dedicates time and resources to allow riders to develop and help ensure a successful transition into the professional ranks.

Phippen was diagnosed with type 1 diabetes in 2016 over the weekend of his 24th birthday. The diagnosis never disheartened the Portland-native as he knew it was a condition that he could manage. With the help from his medical team, he was back on the bike within a week following his diagnosis. Because he had already seen Team Novo Nordisk in the peloton, he immediately reached out to the team to see if they had a spot for him on their elite team. Instead, Team Novo Nordisk offered him a chance to race for the development squad, and Phippen instantly jumped at the chance.

“My appreciation for this opportunity is immense and I am overflowing with gratitude to the team’s management for believing in me. I recognize this is a large step forward and I am motivated to continue distilling and refining my development process as I move into this new chapter,” said Phippen. “Pulling on the pro men’s jersey is quite special. Since I was a young child, racing at the pro level was my dream. My life has taken many courses and I’m so proud to pull on the Team Novo Nordisk Changing Diabetes jersey as we head into the 100th year anniversary since the discovery of insulin, meaning life for those of us living with diabetes.”

Dauge is set to become the third Frenchman amongst the Team Novo Nordisk ranks joining Mehdi Benhamouda and Charles Planet. The Hautes-Alpes-native was diagnosed with type 1 diabetes when he was 18 years old. He was a promising skier in his youth but fell in love with cycling after learning about Team Novo Nordisk. In 2017, he applied for Talent ID camp and began his journey through the team’s development pipeline.

“It's a dream come true becoming a professional cyclist. I worked hard during the suspension of racing due to Covid-19 and managed to progress this season even without much racing,” explained Dauge. “When I joined the development team three years ago, I didn't overthink about becoming a pro, but year after year, I saw with hard work that it could be possible, and it eventually became a goal that I believed in.”

The fight and desire Dauge has shown over the past years was a key factor for management when deciding to take him to the next step.

“It is with great pleasure to welcome Lucas to the professional team. He is a true fighter and worked extremely hard for this advancement,” said General Manager Vassili Davidenko. “Lucas's story is very inspiring as a former skier who fell in love with cycling. He learned about the Team Novo Nordisk program via social media, attended Talent ID camp, and has become very dedicated to the sport. Within three seasons on our development team, he made significant progress, shown good results, and deserves his spot on the professional team for the 2021 season.”

Team Novo Nordisk ended its 2020 racing season at Paris-Tours. The team recently came together in Rhodes, Greece for a 2021 training camp before heading into the off-season.

Lucas Dauge was diagnosed with type 1 diabetes when he was 18 years old.