How a Small, Veteran-owned Ecommerce Brand went from Manufacturing Leather Goods to Mass Producing Personal Protective Equipment in the Fight Against Covid-19 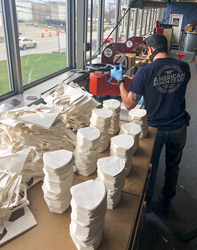 American Bench Craft of Boston, MA getting into the fight against the Covid-19 Pandemic

How in the world were we going to transition from making a handful of handcrafted leather goods a day to 100K mask filters per week?

What started in 2014 as a small, New England based design and manufacturing workshop, handcrafting leather accessories and gear, has evolved over the past 6 years into what the American Bench Craft team describes as their version of the American dream. They were enjoying every minute of their work and 2020 had all the promises of their biggest year yet. Then Covid-19 struck.

Thirty percent of their business, which relied heavily on Corporate Event Gifts, disappeared overnight. However, as an ecommerce store, they were not impacted nearly as much as other businesses forced to close storefronts and lay off staff.

"We knew we could ride this out, but we wanted to do more than just sit and wait," says Jason, cofounder and Chief Operating Officer.

As a 6 year veteran of the Army National Guard, Jason served in a Chemical Biological Radiological and Nuclear Defense unit, but with those days behind him, he felt sidelined as his peers charged into the fight.

"I wanted to do something and was desperate for an opportunity, but just didn't know how best to get involved," he admits.

Then they got the call they were waiting for. Close friends Ben and Whitney Waxman, co-founders of the Portland, Maine apparel company, American Roots, had recently transitioned their facility from manufacturing union-made hoodies to producing essential PPE for healthcare organizations, nursing homes, trade unions, construction companies, and more.

Ben and Whitney where in desperate need of filters for their face masks and immediately thought of fellow union shop, American Bench Craft (IUPAT DC 35 Boston) to get the job done. They told Jason they needed 100K face mask filters per week, and needed him up and running in 48 hours.

Jason gave a firm “yes”, hung up the phone, and sat staring at the wall for 10 minutes. "How in the world were we going to transition from making a handful of handcrafted leather goods a day to 100K mask filters per week?” Jason knew this wasn’t something they'd be able to figure out themselves.

So, he picked up the phone and called Curt Arata from Curt Co. Engineering, a long time friend, machinist and mentor in areas of design and manufacturing. Jason describes the conversation as going something like this:

Curt walked Jason through immediate next steps and began researching processes and equipment needed to quickly increase their production capabilities.

Jason then called Int’l Die of Clarksville, Georgia. They make forged steel dies for cutting American Bench Craft's leather. These dies normally take 1-2 weeks to manufacture and when Jason told them he needed one made and shipped same day, there again was silence on the other end of the line. He then explained it was for essential PPE, and they said they’d get it done.

Jason's next call was to his mom and dad. The first batch of filters needed to be shipped to New York right away and American Bench Craft’s shipping department would not be back in operation until the following week. So, Jason's parents came in, on their wedding anniversary, donning masks and gloves, and got the job done.

The process continued like that; frantic calls, desperate pleas, and an overwhelming sense of pride and gratitude to their fellow Americans willing to drop everything and join the fight against the COVID virus pandemic.

Their team is proud to be a part of the network of small businesses across the country working to support frontline medical workers, first responders, truck drivers, postal workers, grocery clerks, and all other essential personnel.

The American Bench Craft team firmly believes the American spirit is alive and well, and they are more convinced than ever that no enemy, foreign or domestic, visible or invisible can bring this country down.

Donning a face mask and gloves as he cuts filters and stacks them in piles of 1000, Jason says, "We are all going to come through this together.”

American Bench Craft is a small Leather Goods manufacturer located in Wilmington, MA just North of Boston and in the Heart of New England. They are a proud Union Shop and Veteran-Owned Company.To combat the spread of Covid-19, they've transitioned their manufacturing capabilities over to include face mask filters in addition to their line of heavy duty leather goods, gear and accessories.