American College of Lifestyle Medicine honors Dr. Henry Blackburn for lifetime research into the relationship between diet and heart disease

The Dr. Ancel Keys Award recognizes a person who has made significant contributions to thought, evidence, practice and policy through research and the application of scientific principles, with particular emphasis on public health issues and population science. 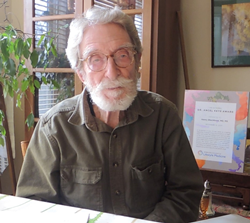 Henry Blackburn, MD, MS, Professor Emeritus at the University of Minnesota, is the 2022 recipient of the college’s Dr. Ancel Keys Award.

“During his esteemed career, Dr. Blackburn has been at the center of groundbreaking research that has defined the relationship between lifestyle and heart disease.”

The American College of Lifestyle Medicine (ACLM) has announced that globally recognized epidemiologist Henry Blackburn, MD, MS, Professor Emeritus at the University of Minnesota, is the 2022 recipient of the college’s Dr. Ancel Keys Award. The award recognizes Dr. Blackburn’s significant contributions to understanding of the causes and prevention of cardiovascular disease as well as research, practice and public policy to reduce the disease’s burden.

Dr. Blackburn received the honor, which is given every three years, at ACLM’s annual Lifestyle Medicine Conference in November that was attended in person and virtually by more than 2,600 clinicians, health leaders and health innovators from some of the nation’s largest health systems.

The Dr. Ancel Keys Award recognizes a person who has made significant contributions to thought, evidence, practice and policy through research and the application of scientific principles, with particular emphasis on public health issues and population science. The recipient must be highly respected through research and publications as a leader in epidemiology, biostatistics and nutrition, with concern for public as well as individual health. The recipient must have shown courage in taking an evidence-based public policy stance.

Dr. Keys, for whom the award is named, conceived and led the Seven Countries Study, which brought together researchers from around the globe. The study determined that “the mass burden and epidemic of atherosclerotic diseases has cultural origins, is preventable, can change rapidly, and is strongly influenced by the fatty composition of the habitual diet.”

Dr. Blackburn was a young medical resident at the University of Minnesota in the 1950s when he applied for a research fellowship in Dr. Keys’ laboratory, beginning a remarkable career spent revealing the effects of lifestyle factors such as diet on heart health. From 1957 to 1972, Dr. Blackburn served as Project Officer of the Seven Countries Study, the first study to systematically examine the relation between lifestyle, diet and rates of heart attacks and strokes on different populations. He also participated in the 50-year mortality follow up.

In a recent interview with ACLM, Dr. Blackburn recalled meeting Dr. Keys, who had recently returned from a field trip to the Italian island of Sardinia, where heart disease was reportedly almost nonexistent. Dr. Keys and his team were researching what cultural differences contributed to differing rate of heart attacks, which at the time were responsible for every second death in the United States.

“Their holy grail was to find out what in the culture might be responsible for those differences,” Dr. Blackburn said. “I found this very interesting and very exciting – and important.”

Dr. Blackburn also developed risk prediction using the resting and exercise electrocardiogram and participated in the design and analysis of physical activity trials, as well as the Coronary Drug Project, a large clinical trial assessing various treatments for coronary heart disease in men. He led population strategies of surveillance and preventive interventions in the Minnesota Heart Survey and the Minnesota Heart Health Program. After retiring in 1996, he created and continues to manage a website focused on the history of cardiovascular disease epidemiology.

“During his esteemed career, Dr. Blackburn has been at the center of groundbreaking research that has defined the relationship between lifestyle and heart disease,” said ACLM Past President Cate Collings, MD, MS, FACC, DipABLM. “Poor overall diet quality remains the single leading cause of premature death in the United States today. The American College of Lifestyle Medicine is proud to honor Dr. Blackburn for his lifetime commitment to demonstrating the importance of addressing diet if we are ever to reverse the trajectory of the U.S. epidemic of chronic disease.”

ABOUT ACLM
The American College of Lifestyle Medicine is the nation’s medical professional society advancing lifestyle medicine as the foundation for a redesigned, value-based and equitable healthcare delivery system, leading to whole person health. ACLM educates, equips, empowers and supports its members through quality, evidence-based education, certification and research to identify and eradicate the root cause of chronic disease, with a clinical outcome goal of health restoration as opposed to disease management. http://www.lifestylemedicine.org