The American College of Lifestyle Medicine (ACLM) today announced international public health leader Pekka Puska the winner of its first Dr. Ancel Keys Award. Puska led the North Karelia Project, which resulted in an 85 percent decline over 35 years in annual heart disease mortality among the Finnish working age population and a dramatic general improvement in public health. The award will be were presented at ACLM’s sold-out 2019 Lifestyle Medicine Conference during the Awards Banquet on Tuesday, Oct. 29 in Orlando, FL. 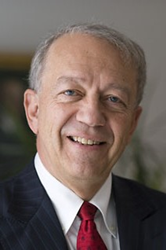 "Like Ancel Keys, Professor Puska has impacted and saved the lives of so many as a leader and contributor to public health and policy."

The American College of Lifestyle Medicine (ACLM) today announced that Pekka Puska, MD, PhD, MPolSc, a Finnish professor, physician and former member of the Finnish Parliament, will be awarded the medical professional society’s first-ever Dr. Ancel Keys Award. The award will be were presented during ACLM’s sold-out 2019 Lifestyle Medicine Conference at its annual Awards Banquet on Tuesday, Oct. 29 in Orlando, FL.

Puska has had a significant influence on public health research and practice in Finland and globally for several decades. He was, for 25 years, the Director and Principal Investigator of the North Karelia Project for prevention of cardiovascular diseases in North Karelia and later on in all Finland. Within 35 years, an over 85 percent decline in annual heart disease mortality among the working age population and a dramatic general improvement in public health took place. Turning an area in Finland with the highest heart disease death rate into a country with one of the lowest, the project is widely seen as a model for successful population-based prevention of cardiovascular and other noncommunicable diseases (NCD).

The Dr. Ancel Keys Award was established to recognize a person who has made significant contributions to thought, evidence, practice and policy through research and the application of scientific principles, with particular emphasis on public health issues and population science. The recipient must be highly respected through research and publications as a leader in epidemiology, biostatistics and nutrition, with concern for public as well as individual health. The recipient must have shown courage in taking an evidence-based public policy stance. It will be awarded by ACLM every three years.

The Keys Award is named in honor of Ancel Keys, who started his career in physiology and moved into public health with experiments to meet wartime needs for survival rations (the “K-ration”) and to re-nourish the starving survivors of war in Europe. After the war, Keys became interested in tracing the causes and prevention of cardiovascular diseases, initiating studies that included the landmark epidemiologic “Seven Countries Study” showing the correlation of dietary saturated fat to heart disease. He named and evaluated body mass index (BMI) and with his wife also introduced the Mediterranean Diet.

Puska formerly held the position of Director General of Finland’s National Institute for Health and Welfare from 2009 to 2013, and currently is a professor at University of Helsinki and University of Eastern Finland. He has twice served as a member of the Finnish Parliament, working on both its Health and Social Affairs and Education committees.

From 2001 to 2003 Puska served as the Director for Noncommunicable Disease Prevention and Health Promotion at the World Health Organization Headquarters in Geneva. At WHO, Puska directed the work on integrated prevention of NCD targeting the main risk factors (tobacco, unhealthy diet and physical inactivity) through health promotion, national programs, policy measures and regional networks. His department’s work culminated in adoption of the Global Strategy on Diet, Physical Activity and Health by the World Health Assembly in 2004.

Among his several honors are Honorary Doctorate at St. Andrew’s University (Scotland) and Lisbon University, as well as Academician of the Russian Academy of Natural Sciences. He has received, among other recognition, WHO’s annual Health Education Award in 1990, WHO Tobacco Free World Award in 1999, the Nordic Award for Public Health in 2005, and the Rank Prize in 2008.

Puska continues his affiliation with THL, the country’s comprehensive national institute for public health and welfare under Finland’s Ministry of Health.

“Pekka Puska is deserving of this award for the creative and courageous efforts he has made throughout his career, not just for the health of the people of Finland, but people around the world,” said ACLM President Dexter Shurney, MD, MBA, MPH, FACLM, DipABLM. “He is a giant in cardiovascular research and policy. Like Ancel Keys, Professor Puska has impacted and saved the lives of so many as a leader and contributor to public health and policy. We are honored to have Pekka Puska be our first Dr. Ancel Keys Award recipient.”

ABOUT THE AMERICAN COLLEGE OF LIFESTYLE MEDICINE: ACLM is the medical professional association for those dedicated to the advancement and clinical practice of Lifestyle Medicine as the foundation of a transformed and sustainable health care system. Lifestyle Medicine involves the use of the use of a whole food, plant-predominant dietary lifestyle, regular physical activity, restorative sleep, stress management, avoidance of risky substances and positive social connection as a primary therapeutic modality to prevent, treat, and, oftentimes, reverse the lifestyle-related, chronic disease that's all too prevalent. ACLM addresses the need for quality education and certification, supporting its members in their individual practices and in their collective desire to domestically and globally promote Lifestyle Medicine as the first treatment option, as opposed to a first option of treating symptoms and consequences with expensive, ever-increasing quantities of pills and procedures. Join today at http://www.LifestyleMedicine.org.