Scholar on diversity, equity, accessibility, and inclusion and committed advocate for social justice celebrated for achievements in her scholarly career. 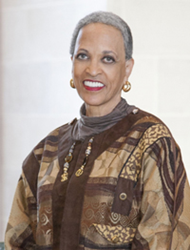 Dr. Johnnetta Betsch Cole will deliver the Charles Homer Haskins Prize Lecture, “A Life of Learning,” presented by ACLS, on Thursday, May 20, 2021 at 3:00 PM ET.

The American Council of Learned Societies welcomes anthropologist, distinguished educator, and museum professional Dr. Johnnetta Betsch Cole, who will deliver the Charles Homer Haskins Prize Lecture, “A Life of Learning,” on Thursday, May 20, 2021 at 3:00 PM ET.

The American Council of Learned Societies (ACLS), a leading supporter of American scholarship in the humanities and interpretive social sciences, is pleased to welcome anthropologist, distinguished educator, and museum professional Dr. Johnnetta Betsch Cole, who will deliver the Charles Homer Haskins Prize Lecture, “A Life of Learning,” which celebrates scholarly careers of distinctive importance. This event will be presented on Thursday, May 20, 2021 at 3:00 PM ET.

Dr. Cole currently serves as the National Chair and Seventh President of the National Council of Negro Women (NCNW), an advocacy organization with more than two million members, working in the interest of women’s rights and civil rights.

In May 2021 at the 93rd Academy Awards, Pete Docter, director of Soul, which won the Oscar for Best Animated Feature, thanked Dr. Cole for her consulting work on the film, which he said, “kept us honest and kept those characters truthful.” Dr. Cole is also featured in the new digital series on Facebook Watch, "Roland S. Martin Presents We Got Next," in a fascinating discussion with Tiffany D. Loftin, the National Director of the NAACP Youth & College Division. She was also recently appointed special counsel on strategic initiatives by the Baltimore Museum of Art appointed, which will have her working with the museum’s board and the leadership team as they implement their strategic plan.

Dr. Cole first rose to national prominence as the first African American woman President of Spelman College and, later, as President of Bennett College, making her the only person to serve as president of both historically Black colleges for women in the United States. Over the course of her career, she has held teaching and administrative positions in anthropology, women’s studies, and African American studies at several major colleges and universities.

After retiring from academia, Dr. Cole served as the Director of the Smithsonian National Museum of African Art for eight years. Upon her retirement from the Smithsonian, she received the title of Director Emerita. Following her years at the Smithsonian, Dr. Cole was a Principal Consultant with Cook Ross, a management consulting firm, where she co-led a Chief Diversity Officer Leadership Forum and worked with various companies to create more inclusive and equitable workplaces. As a Senior Consulting Fellow at the Andrew W. Mellon Foundation, she worked on initiatives on diversity, equity, accessibility, and inclusion in art museums and higher education.

Dr. Cole was the first African American to serve as the Chair of the Board of United Way of America. Recently she was on the board of Martha’s Table, a nonprofit that supports children, families, and communities in Washington, DC through quality education, healthy food, and community support. She has also held leadership positions in a number of professional organizations, including the Association of Art Museums Directors where she served as the president, and she co-led the American Alliance Museum’s Working Group on diversity, equity, accessibility, and inclusion.

She has served on the corporate boards of Home Depot, Merck, and Nation’s Bank South, and was the first woman appointed to the board of Coca-Cola Enterprises. She is a member of the American Academy of Arts and Sciences, a fellow of the American Anthropological Association, a member of the Association of Black Anthropologists, and the Scholarly Advisory Council of the Smithsonian National Museum of African American History and Culture. She is a member of Delta Sigma Theta Sorority, Inc., The Links, Inc., and a Life Member of the NAACP.

Dr. Cole has authored, co-authored, and edited several books including All American Women - Lines That Divide Ties That Bind; I AM Your Sister- Collected And Unpublished Writings of Audre Lorde, edited with Rudolph P. Byrd and Beverly Guy-Sheftall; and Diversity, Equity, Accessibility, and Inclusion In Museums, edited with Laura L. Lott. Her most recent book, Racism in American Public Life: A Call to Action, was published by the University of Virginia Press in February 2021.

Dr. Cole began her higher education in an early entrance program at Fisk University, and completed her undergraduate studies at Oberlin College. She earned an M.A. and a Ph.D. in anthropology with a specialization in African Studies from Northwestern University.

About the American Council of Learned Societies
Formed in 1919, the American Council of Learned Societies (ACLS) is a nonprofit federation of 78 scholarly organizations.  As the preeminent representative of American scholarship in the humanities and related social sciences, ACLS holds a core belief that knowledge is a public good. As such, ACLS strives to promote the circulation of humanistic knowledge throughout society. In addition to stewarding and representing its member organizations, ACLS employs its $140 million endowment and $35 million annual operating budget to support scholarship in the humanities and social sciences and to advocate for the centrality of the humanities in the modern world.