Robert Black, Co-Owner of Catoctin Mountain Orchard in Thurmont, MD, has been named the 2020 Apple Grower of the Year by American Fruit Grower® and Western Fruit Grower® magazines, published by Meister Media Worldwide. Black, the 32nd recipient of the award, which began in 1989, will be honored Aug. 20 during a virtual edition of the annual USApple Outlook and Marketing Conference. 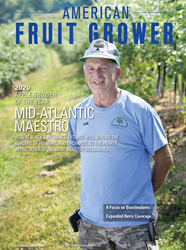 Robert Black, Co-Owner of Catoctin Mountain Orchard in Thurmont, MD, has been named the 2020 Apple Grower of the YearSM by American Fruit Grower® and Western Fruit Grower® magazines, published by Meister Media Worldwide.

Black, the 32nd recipient of the award, which began in 1989, will be honored Aug. 20 during a virtual edition of the annual USApple Outlook and Marketing Conference.

“I’m amazed and shocked that I have won this award and appreciate being among my peers who have gone before me," Black, who shares co-ownership with his sister, Patricia, said. "This is absolutely an amazing thing to have happen to my family. My sister has always been the one to stay home to keep the home fires burning and allow me to travel. She certainly has been a great partner in this operation.”

David Eddy, the Editor of American Fruit Grower and Western Fruit Grower magazines and a member of the award selection committee, said the public nomination process spoke well of Black’s stature within the industry.

“I’ll never forget the day I called Bob to tell him he had won the award. Because he’s such a humble man, at first he actually insisted we must have made a mistake," Eddy said. "It just reinforced what I had already read in the many enthusiastic nominations we received endorsing Bob, from university researchers — in multiple states, no less — to numerous fellow growers. Bob is definitely a popular winner.”

Sponsored by Valent USA, the Apple Grower of the Year program honors individuals who have gone beyond the confines of the orchard and, through their involvement and leadership, have made genuine impacts on the apple industry.

“Bob demonstrates a willingness to listen and an openness to change that all come together as his personal recipe for success,” Dion McBay, Vice President of Sales with Valent USA, said. “Bob is a clear advocate for sustainable agriculture and has made investments and improvement in irrigation technology, integrated pest management, and the use of biological and biorational tools. Beyond his commitment to sustainable agriculture and his operational improvements, Bob is a relentless advocate for Maryland agriculture and a proud participant in the U.S. apple industry.”

Black represents the second Maryland farming operation to win the award, following Evan Milburn and his late son Nathan, of Milburn Orchards, who were honored in 2008. He is highly regarded for displaying leadership on the state and regional levels.

“Bob Black has been a staple in the Mid-Atlantic fruit-growing region for decades,” Mark Boyer, the Co-Owner of Ridgetop Orchards in Fishertown, PA, said. “He has served on almost every board position available both in fruits and vegetables to social and community. Always the first to help and the last to complain.”

Black has excelled in the areas of commercial planting and direct marketing and has served on the boards of the International Fruit Tree Association and Maryland State Horticultural Society. He is a member of the Midwest Apple Improvement Association (MAIA), which was founded by growers to produce varieties for its membership.

“I don’t know any other grower who has more variety trials in progress,” Brad Hollabaugh, the Apple Grower of the Year winner in 2000, representing Hollabaugh Bros., said. “Bob is also always willing to share tricks, techniques, and the results of his many production endeavors. Equally, he’s an avid listener to other growers, always looking for ways to improve his operation.”

USApple President and CEO Jim Bair credited Black for devoting his career to making a meaningful impact on the apple industry.

“When he is not working on groundbreaking innovations in his orchards, he is helping and championing other growers,” Bair said. “From his past leadership on USApple’s board to his ongoing commitment to represent Maryland every year during our Capitol Hill Day, he is always at the ready to advocate for the industry. We congratulate Bob for this much-deserved honor.”

About Meister Media Worldwide
Meister Media Worldwide offers business solutions designed to cultivate a sustainable world through the power of knowledge. It accomplishes this through a host of integrated print, digital and data product offerings, and a variety of in-person events with a singular focus: to further specialized agriculture globally. In addition, its business services division utilizes Meister Media’s wealth of knowledge, combined with the latest technology, to develop strategic business services from concept planning through development and delivery. An industry leader, Meister Media’s mission is to be your trusted partner, empowering the business of global agriculture to grow a better world. With headquarters in Willoughby, Ohio, Meister Media Worldwide was founded in 1932 and operates out of offices throughout the United States and around the world. MeisterMedia.com.