American International College (AIC) has announced the addition of men’s volleyball to the College’s athletic program with competition starting in the 2021-22 academic year. Hector Jose Reyes has been named as the program’s inaugural head coach. AIC worked with First Point Volleyball Foundation to help jumpstart the program. 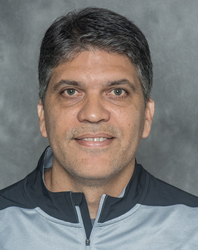 Men’s volleyball is a sport that has experienced tremendous growth, especially at the high school and collegiate levels. We look forward to contributing to that expansion and becoming a competitive volleyball program in New England.

Chapin and Cribbin worked with First Point Volleyball to help jumpstart the program. The First Point Volleyball Foundation exists to provide opportunities for young people to mature and develop through volleyball and is specifically focused on growing boys’ and men’s volleyball in the United States. To help spur development of the sport, the Foundation will gift $10,000 to help the College with start-up costs.

“We are excited to continue to expand our athletic opportunities at AIC,” said Chapin. “We feel the addition of men’s volleyball is a natural fit for the AIC community given the strength of our women's program. Men’s volleyball is a sport that has experienced tremendous growth, especially at the high school and collegiate levels. We look forward to contributing to that expansion and becoming a competitive volleyball program in New England.”

With the addition of men’s volleyball to the Yellow Jackets athletic programs, Cribbin, who successfully coached AIC women’s volleyball for eight years, has been promoted to director of volleyball and will oversee both programs. According to Chapin, “Matt has done an amazing job establishing our women’s program as one of the premiere programs in New England and has gained a great deal of personal and program accolades since coming to AIC in 2012. We are excited to see Matt foster the growth of our men’s program into another well-known, competitive program.”

Hector Jose Reyes will be joining the Yellow Jackets as the inaugural men’s volleyball coach. Reyes joins the College after spending the past four seasons at Iowa State University as the technical coordinator for player development. In this role, he assisted the Cyclones with opposition scouting and in-game analytics. Prior to his time at Iowa State, the Puerto Rico native spent two seasons at University of Evansville as an assistant coach. According to Cribbins, he is a welcome addition to the Yellow Jackets, “I am thrilled to announce Hector Jose Reyes as AIC’s first-ever men’s volleyball coach. His experience with professional, national teams and NCAA volleyball make him the ideal candidate to fulfill the vision we have for AIC volleyball.”

In addition to his higher education experience, Reyes worked with six different clubs including the men’s national team, the U18 women’s team, and the U21 men’s team. He has also worked with Olympians Destinee Hooker, Kim Glass, Ogonna Nnamani, Kristie Porter, and the 2002 men’s FIVB World Grand Prix MVP Marcos Milinkovic. Reyes graduated with a bachelor’s degree from the School of Fine Arts in San Jan, Puerto Rico, in 2002, and earned his associate’s degree in business administration from the University of Puerto Rico in 1995.

About Boys’ and Men’s Volleyball in the United States
Boys’ volleyball is exploding. Volleyball is the fastest growing team sport in the United States for high school boys, growing at a rate of 21 percent over the last five years. The second fastest-growing sport grew by only 11.4 percent, and football decreased nine percent over the same five-year period. With 63,000 boys currently playing high school volleyball, it is projected that 100,000 boys will be playing by 2028. New men’s volleyball programs have been initiated in 80 universities in the last five years alone – mostly at the DII, DIII, and NAIA levels.