The 80th annual Model Congress at American International College (AIC) will convene on Thursday, January 9, 2020. Founded in 1940, AIC’s Model Congress is the longest running continuous congress of its type in the nation, and one of the College’s oldest campus traditions. United States Congressman and Chairman of the Ways and Means Committee Richard E. Neal, an AIC alumnus, will serve as the keynote speaker at this milestone anniversary. 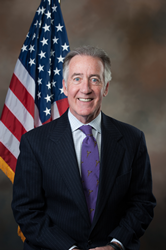 US Congressman Richard E. Neal, a 1972 alumnus of American International College in Springfield, MA, will deliver the keynote address at the college's 80th Model Congress on January 11, 2020.

The 80th annual Model Congress at American International College (AIC) will convene on Thursday, January 9, 2020 with Springfield Mayor Domenic J. Sarno delivering the opening welcome remarks for this milestone anniversary at 6 p.m. in the Mahogany Room at the Sheraton downtown.

Founded in 1940, AIC’s Model Congress is the longest running continuous congress of its type in the nation, and one of the College’s oldest campus traditions. Each year, AIC’s Model Congress brings high schools from throughout New England to campus to write, debate, and pass legislation in a simulated congress. The program is completely student run from program development, coordination, and hospitality to the organization and facilitation of the legislative sessions. With support from faculty and staff, AIC student leaders have kept the program thriving and secured its place as an educational opportunity for high school students throughout the northeast for eight decades.

The AIC Model Congress is also one of the Commonwealth’s long-standing academic traditions during its rich history. Committee sessions will be held throughout the day on Friday and Saturday, January 10 and 11. Keynote speaker, United States Congressman and Chairman of the Ways and Means Committee Richard E. Neal will address the students on Saturday, January 11, 2020 at 11 a.m. in the Karen Sprague Cultural Arts Center/Esther B. Griswold Theatre located on the AIC campus.

Neal is a 1972 graduate of American International College, where he received his Bachelor Degree in Political Science and was a member of the National Honor Society. He received a Master of Public Administration from the University of Hartford in 1976.

First elected to the United States House of Representatives in 1988 after having served as mayor of the city of Springfield from 1984, Congressman Neal joined the Ways and Means Committee in 1993. In January 2019, he assumed the esteemed position of chair of that committee, marking the first time since 1875 that a representative from Massachusetts had done so. Chairman Neal is the dean of both the Massachusetts Delegation and the New England Congressional Delegation. In addition, he is an At-Large Whip for the House Democrats, is co-chair of the New England Congressional Caucus where he advocates for the unique interests of the six New England States, and is Democratic Leader of the Friends of Ireland Caucus.

The AIC Model Congress awards scholarship opportunities to its top delegates. The top delegate will receive the Kathryn Mauke Scholarship, a full four-year tuition scholarship to American International College. Second and third place delegates receive a $10,000 and $5,000 four-year scholarships respectively to AIC. In addition, Best Bill, Outstanding Delegation, and School Spirit awards are given to the schools that submit the most outstanding legislation and demonstrate the highest level of participation, enthusiasm, and team spirit.