American Portfolios recently served as Presenting Partner for the World T.E.A.M. 2019 Face of America - Gettysburg bike ride and ranked as the event’s top fundraiser, raking in a total of $96,673 in charitable funds for the non-profit organization. 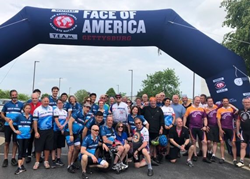 The 63 members of Team American Portfolios were among 500-plus riders, including active and retired military personnel, wounded warriors and adaptive athletes.

“Our role as Presenting Partner for the 2019 Face of America - Gettysburg cycling challenge has been an extremely rewarding accomplishment. The many experiences American Portfolios has had through its association with World T.E.A.M. have been transformative." -- CEO Lon T. Dolber

American Portfolios Financial Services, Inc. (AP), a privately-held, independent broker/dealer that provides services and support to financial advisors throughout the country, recently served as Presenting Partner for the World T.E.A.M. (WT) 2019 Face of America - Gettysburg (FOA) bike ride, which took place on May 3-5, 2019. This year marked AP’s 12th FOA bike ride from Washington, D.C., to the battlefields of Gettysburg, Pa., over the course of two days. As in previous years, the firm also ranked as the event’s top fundraiser, this year alone raking in a total of $96,673 (as of publication) in charitable funds for the non-profit organization that brings adaptive and able-bodied athletes together by empowering, enabling and engaging individuals through inclusive athletic programs.

AP CEO and WT Vice Chairman Lon T. Dolber, in his long-standing commitment to Corporate Social Responsibility (CSR), has been involved in WT events since 2007; his participation has evolved over time into firm-wide support for the non-profit organization. “Our role as presenting partner for the 2019 FOA has been an extremely rewarding accomplishment,” he states. “The many experiences AP has had through its association with WT have been transformative. Watching our staff members and affiliated colleagues come away inspired and personally fulfilled after helping their fellow teammates achieve what was never thought possible is something that never loses its spark. That feeling is one of the core reasons our firm proudly supports WT’s mission to create life-changing and awe-inspiring experiences for adaptive athletes.”

The 63 members of Team American Portfolios were among 500-plus riders, including active and retired military personnel, wounded warriors and adaptive athletes. Of these riders, several hail from the United Kingdom and Canada, as well as two adaptive riders from Kosovo, for whom the American Portfolios Foundation, Inc. provided logistical financial support in order to participate in the cycling challenge. The ride also included noteworthy participants: 1) Retired U.S. Army Col. Gregory D. Gadson, who owns the distinction of being the official WT ambassador and honorary chair (Gadson, a motivational speaker and long-time supporter of WT’s mission, was one of AP’s keynote speakers at the firm’s annual national conference, Connections 2018); and 2) Retired professional road bicycle racer Tyler Hamilton, whose 32-member Team Tyler Hamilton Training included riders from the Fort Bragg Warrior Transition Unit, whose mission is to facilitate community building, resiliency and healing.

On May 4, 2019, FOA riders began part one of their two-day trek from the nation’s capital to the battlefield at Gettysburg. At the close of the program, riders were met with a new finish line experience at Brown's Ranch, located at Gettysburg National Military Park; during the July 1863 Battle of Gettysburg, the house on the farm was used as the headquarters for Confederate General A.P. Hill, commander of the 3rd corps for General Robert E. Lee's army. FOA athletes were welcomed at the ride’s conclusion with the festive Brown’s Ranch Barn Party and Roast, featuring a live band and a satisfying roasted chicken lunch.

Headquartered in Holbrook, N.Y., American Portfolios Financial Services, Inc. (APFS) is a full-service, independent broker/dealer and member firm of FINRA and SIPC, offering a complete range of financial services, including personal financial and retirement planning, securities trading, mutual funds, access to investment research, long-term care planning, insurance products and tax-free investing. Fee-based asset management is offered through its sister subsidiary, American Portfolios Advisors, Inc., (APA), an SEC Registered Investment Advisor. Both entities, along with technology entity American Portfolios Advisory Solutions, LLC, collectively reside under the legal entity American Portfolios Holdings, Inc. (APH). Full-service securities brokerage is available through a clearing firm relationship with Pershing, LLC, a BNY Mellon firm, the securities of which are held on a fully disclosed basis. The company currently serves 837 independent investment professionals located in 388 branch locations throughout the nation. It was named Broker-Dealer of the Year* (Division III) by Investment Advisor magazine in 2015, 2016, 2017 and 2018, as well as one of the Best Companies to Work for in the state of New York for 2016, 2017, 2018 and 2019 by the New York State Society for Human Resources Management (NYS-SHRM) and the Best Companies Group (BCG).

*Based on a poll of registered representatives conducted by Investment Advisor magazine. Broker/dealers rated highest by their representatives are awarded “Broker/Dealer (B/D) of the Year.”

World T.E.A.M. brings adaptive and able-bodied athletes together by empowering, enabling and engaging individuals through inclusive athletic programs. For more than a quarter century, our organization has used athletics to challenge men, women and children with disabilities to accomplish goals they never thought possible. In all our programs – whether mountain climbing, biking, white water rafting or many other sports – we include both adaptive and able-bodied participants.

This year marked AP’s 12th FOA bike ride from Washington, D.C., to the battlefields of Gettysburg, Pa., over the course of two days.