Former TN Governor Bill Haslam shares lessons from his time in office and encourages the next generation of leaders. 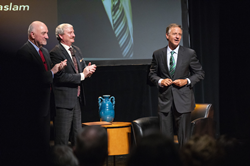 It’s been fun getting to know FHU. People may say ‘Why do you care about a private university?’ But without all of our independent universities and colleges, we’re not going to hit our goal of 55 percent of Tennesseans with a college degree or certificate by 2025.

Held in the Renaissance Center’s Performance Hall and with entertainment by The Danberrys, a husband-wife duo from Nashville, the event featured former Tennessee Governor Bill Haslam as this year’s guest. FHU President David Shannon and Dr. Bob Spencer, director of the nursing program at FHU/Dickson, interviewed Haslam on various topics including staying grounded in politics, making difficult decisions and offering advice for aspiring public servants.

“Government is a worthy vocational calling for people of faith,” Haslam said. “(In my youth) I wanted to be a preacher. I feel like I did it, just from a mayor’s and then a governor’s office.”

Haslam was a two-term mayor of Knoxville before he ran for governor. He described his eight years as governor of Tennessee as the best job he’s ever had.

He highlighted five things he learned while in office: hire great people, know your numbers (budget/finances), know what you want to do, just because something is a good idea, doesn’t mean it’s the right idea and give grace to leaders. Haslam said his leadership style involves defining reality, saying ‘thank you’ and bearing the pain instead of inflicting it.

“You make the best decisions you can and you surround yourself with people who know you and what you’re trying to do,” Haslam said.

Fifty students are expected to graduate from FHU/Dickson this spring with minimal debt, which allows them to advance their careers and provide better for their families.

FHU/Dickson admissions counselor and nursing student Ben Selbe will be one of the spring graduates. “Almost every student here works and attends school allowing us to receive a high quality education while still living at home and working to support our families,” he said.

Citing education as the foundation of change, Haslam said it changes a person’s trajectory and impacts income equality.

“It’s been fun getting to know FHU,” said Haslam, who mentioned there is a photo of him tossing around his autographed basketball from the 2018 NAIA Lady Lions championship team. “People may say ‘Why do you care about a private university?’ But without all of our independent universities and colleges, we’re not going to hit our goal of 55 percent of Tennesseans with a college degree or certificate by 2025.”

FHU/Dickson is the only baccalaureate educational institution in Dickson County. It provides junior and senior level classes for transfer students and graduate degrees for those who have already completed baccalaureate degrees. Bachelor’s degrees are available in elementary education, business management, accounting, psychology, social work and nursing.

Shannon, Spencer and Haslam share a laugh during their discussion.