Watch this important film about an African-American family found murdered in their NJ suburban home. A roller-coaster of emotion, as the surviving father tries to find the truth. 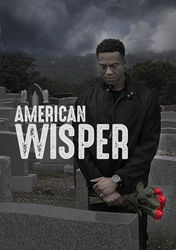 American Wisper - a film about a suburban family found murdered in their home, and the husband's quest to find the truth.

A Roller-Coaster of Emotion, as the Father Tries to Uncover the Truth.

(Open Communications Inc.) — American Wisper is the true story of the unsolved murders of an African American family. In the summer of 2016, a mother and her three children were found shot to death in their suburban New Jersey home. They were discovered by father and husband Josiah Wisper — a brash businessman who owned bars, restaurants, stores and real estate properties in Harlem, New York. Wisper quickly became a pariah in the Harlem community — and was viewed with suspicion by friends, relatives, and people he had known for nearly half his life.

The film is based on true events, and based on withheld police reports issued at the time of the murders. And, according to Writer/Producer Howard Nash, the ending will leave audience members speechless.

The producers want it known that they are seeking to have the original case reopened, and feel that a film in wide release is the only way to make that happen.

But, a clarion “Call to Action” isn’t as easy as it sounds. Howard Nash revealed, “I’ve noticed a fair amount of bias when it comes to smaller, independent films with African American leads. The smaller movie sites and platforms aren’t even selecting them. So it becomes even more important to get the word out, so that people can see things for themselves.” Nash raised his funding independently, and today remains gratified that he ignored Hollywood’s “professional” advice to abandon the project while it was still in development.

Nash maintains American Wisper is the movie that Hollywood hoped would never get made. When presenting the project to major studios, he was repeatedly warned that “no one will ever come and see it.” And one of the most powerful producers in Hollywood once told Nash to “make the family White, as doing so would make the project a lot more marketable.”

American Wisper has now played at festivals all over the world, won nine International Film Festival awards, and is currently nominated for seven more. But more importantly, it continues to expand its audience, having garnered over 850,000 views on Amazon, DVDs and other platforms since its release in March, 2020.

“American Wisper — a very tight thriller — thanks to a tight directorial effort, a tense script and strong performances by all involved. it’s a genre movie that shouldn’t be missed.” — Mike Haberfelner / SMT News & Reviews