The Netflix documentary Tiger King was viewed more than 34 million times in its first ten days of release early this year, but missed the true story. A new documentary, The Hidden Tiger, from Atlanta based Rescue Doc Films – with help from Carole and Howard Baskin of Netflix Tiger King fame – shows what abusers like Joe Exotic and Doc Antle want to hide: the truth about American tigers. The Hidden Tiger focuses its attention on the approximate 10,000 tigers suffering in captivity here in the U.S. and explores how legislation proposed for 2021 could provide an end to this abuse. 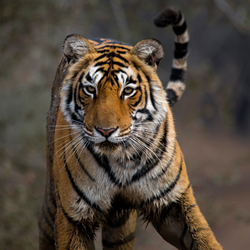 A new documentary slated for release in December, The Hidden Tiger, was produced by Rescue Doc Films in partnership with the Baskins and many other tiger experts worldwide. Unlike Tiger King, the documentary The Hidden Tiger shines a spotlight on a very real and uniquely American tragedy

A shocking fact to consider: There are now more tigers living in the backyards, roadside attractions, theme parks, zoos, and sanctuaries in the United States than there are in the wild.

Under-regulated, over-bred, and exploited, these apex predators are born into a lifetime of captivity with a surprising consequence — their caged existence helps undermine the already difficult task of saving their wild counterparts from the black markets.

With work in India, Nepal, the U.K, and across the U.S., The Hidden Tiger is a global exposé revealing the links between captive tigers and the possible extinction of wild tigers. Throughout their worldwide investigations, producers Josh Gildrie, Elizabeth McGovern and Michael Samtesto of Rescue Docs Films uncovered alarming realities:

An estimated 10,000 tigers are being exploited and abused for human entertainment in the U.S., yet fewer than 4,000 tigers remain in the wild.

With its December 26, 2020 release of The Hidden Tiger, Rescue Doc Films explores promising solutions with current conservation efforts being made in Asia and the push to enact responsible federal legislation in America through the bi-partisan Big Cat Public Safety Act.

For The Hidden Tiger, Rescue Doc Films partnered with NGO’s such as Panthera, the International Fund for Animal Protection (IFAW), the Environmental Investigation Agency, the World Wildlife Fund (WWF), as well as Steve Winter of National Geographic, and multiple sanctuaries including Big Cat Rescue with Howard and Carole Baskin.

For more information on the documentary, please visit http://thehiddentiger.com/ or https://rescuedocfilms.org, and should you like to schedule an interview with any of our partners, please reply to the media contact herein to make arrangements.