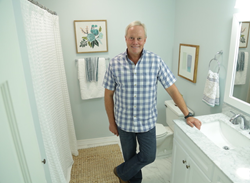 The price tag for bath renovations can add up quickly, but there are plenty of ways to create a fresh, updated look for less.

Form and function are important in today’s homes. That’s why home improvement expert and host of “Today’s Homeowner,” Danny Lipford, launched a national media event today to share ways homeowners can improve both the aesthetics and functionality of the most used room in the house – the bathroom.

Lipford showcased a bathroom project he recently completed for an episode of his nationally syndicated television show, “Today’s Homeowner.” “Bathroom updates continue to be one of the most popular home improvement projects for homeowners,” says Lipford. “The price tag for bath renovations can add up quickly, but there are plenty of ways to create a fresh, updated look for less.”

Broadcasting live from a home in Mobile, AL, Lipford kicked off the event with a tour of the “before” bathroom. He pointed out several areas that homeowners often want to address in renovations, including:

To open up the space, Lipford removed a large, center linen cabinet to make room for a new double vanity, increasing the functionality of the room. Demolition is a key area where homeowners can save on renovations according to Lipford. As a budget-friendly alternative to vanity replacement, Lipford suggested adding a new faucet and hardware to achieve a modern, updated look. He showed viewers a great option from Danze by Gerber’s Vaughn Collection, which the homeowners selected for their bathroom makeover.

Next, he offered homeowners another way to save big on bathroom renovations – repairing rather than replacing. New toilets can cost hundreds of dollars. Instead of buying new, Lipford recommended using a Performax All-In-One Repair Kit from Fluidmaster to replace the existing toilet’s interior mechanism. At a cost of about $20, this kit helps an existing toilet operate more efficiently at a fraction of the cost for something new.

During the media event, sponsored by Danze by Gerber and Fluidmaster, Lipford connected with 25 television and radio hosts and a nationwide audience of more than 20 million viewers. A broadcast-ready clip with Lipford’s advice is available to the media. The complete step-by-step renovation of the featured bathroom will debut on “Today’s Homeowner” TV week of October 8. Visit TodaysHomeowner.com to check local listings.

Host and founder of the brand, Danny Lipford, is among the most sought-after home improvement experts in the country. The seasoned remodeling contractor and media personality served as the home improvement expert for CBS’s “The Early Show” and The Weather Channel for over a decade and has made more than 190 national television appearances on “FOX & Friends,” “Inside Edition,” “Morning Express with Robin Meade,” FOX Business Channel, “Rachael Ray” and more. He travels the country making appearances as a brand ambassador and spokesperson, and contributes expertise to hundreds of popular magazines and online media outlets each year.