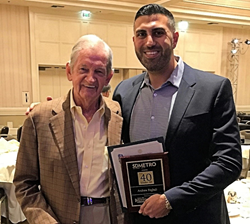 The awards program encourages entrepreneurial activity among those with potential and recognizes the contribution of young people who inspire others with their leadership and achievement," said Feghali.

As the owner and operator of 12 Little Caesars Pizza franchises, Andrew Feghali, CEO of AMF Foods, Inc. was honored as one of San Diego’s 40 Under 40 Class of 2018 by the SD METRO Magazine on October 4th at the Sheraton Hotel & Marina.

In its 19th year, the 40 Under 40 awards program was founded to acknowledge the contributions of San Diego's young leaders. SD METRO believes it is these young men and women who will shape the region's destiny. According to the publication, more than 200 professionals were nominated. Honorees were selected based on their personal accomplishments, community involvement and career achievements.

Feghali is the founder of restaurant holding company AMF Foods, Inc. The company has experienced annual sales growth from $1.5MM in 2009 to over $9MM (projected) in 2018. It was listed on the July 2, 2018 San Diego Business Journal Locally-Owned Restaurant Franchisees list. In addition to running his Little Caesars restaurants in Southern California, Colorado, and Texas, Feghali’s mentor, Jerry Rollins, CEO of Sage Executive Group, gave him the opportunity to serve alongside him as a Sage Executive Group Forum Co-chair in January 2018.

“I believe Andrew is an exemplary CEO and corporate citizen. He’s a visionary, educator, and hands-on leader--well deserving of the ‘40 Under 40’ honor,” said nominator, Sage Executive Group CEO Jerry Rollins. “He’s enthusiastic and driven to provide his employees with opportunities, as well as finds time to contribute to the local community.”

“It’s a distinct honor to be recognized by the SD METRO as an under 40 award-winner,” said AMF Foods CEO Andrew Feghali. “The awards program encourages entrepreneurial activity among those with potential and recognizes the contribution of young people who inspire others with their leadership and achievement. San Diego is a vibrant community, and the talent, drive and ambition of this year’s honorees was outstanding.”

Feghali’s industry experience dates to his years as one of the youngest District Managers for PepsiCo - Frito Lay, Inc. Southern California. At 21 he oversaw 20 route sales reps as direct reports and 150 accounts with more than $9MM in annual sales. He led the district to three record-breaking quarters in 2008 during the height of the Great Recession.

About AMF Foods, Inc.
Founded in 2014 by Andrew Feghali, AMF Foods is a holding company that owns and operates 12 Little Caesars Pizza franchises with: eight locations in Southern California; three locations in Colorado, and one location in Texas. Little Caesars is an internationally recognized brand known for providing one of the world’s favorite foods quickly, conveniently, affordably and using quality ingredients.

40 Under 40 honorees were featured in the SD METRO October 2018 print edition.

In its 19th year, the 40 Under 40 awards program was founded to acknowledge the contributions of San Diego's young leaders.