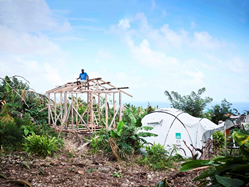 ShelterBox provides shelter and resources on Dominica in the Windward Islands after the impacts of hurricanes Maria and Irma in 2017.

“We are working to tackle one of the biggest issues facing our world, the massive displacement of people. With 104 million currently displaced by disaster or conflict, and with the additional threat of COVID-19, the need for our work has never been greater." Kerri Murray, ShelterBox USA President

ShelterBox, a humanitarian aid organization providing emergency shelter and essential relief supplies, has surpassed providing support to 2 million people as of April 2021. The disaster relief organization was founded in 2000 and its iconic green boxes containing the essentials for recovery: a humanitarian tent which provides a temporary home to a displaced family, along with other critical items like solar lights, water purification, blankets, and cooking equipment to quickly set up a household. The organization, which targets its aid to families displaced by disasters and conflict situations, was nominated in 2018 and 2019 for the Nobel Peace Prize in acknowledgement of its work in some of the world’s most extreme conflict zones. “We are working to tackle one of the biggest issues facing our world, the massive displacement of people. With 104 million currently displaced by disaster or conflict, and with the additional threat of COVID-19, the need for our work has never been greater, said ShelterBox USA President Kerri Murray. “Whether disaster, violent conflict, or now a global pandemic, shelter is one of the most profound differences we can make in someone’s life,” said Murray.

Although the majority of events that ShelterBox has responded to over the last 21 years have been weather or climate related, the organization’s crisis and conflict related responses have continued to increase. Over one third of the people supported by ShelterBox were involved in crisis or violent conflict situations, including the organization’s ongoing response to the war in Syria which began in 2012 and continues today. “Since ShelterBox was founded, we have focused solely on the provision of emergency shelter and supplies, providing the fundamental building blocks necessary to create a home and enable the self-recovery of communities devastated by disaster. It took us 15 years to reach the first one million people, and only five years to reach a total of two million people served by ShelterBox. I believe this trend will only accelerate as we work to significantly expand our efforts to better meet the increasing need for our support around the world,” said Murray.

ShelterBox is the official Project Partner of Rotary International and has supported hundreds of other disasters and conflicts around the globe during its 21-year history, including the 2004 Boxing Day Indian Ocean Tsunami, the 2010 Haiti Earthquake, several typhoons and volcanic eruptions across the Philippines, and within numerous refugee camps across the Lake Chad Basin of Africa. “The lifesaving work of ShelterBox is only possible because of private charitable support from individuals, foundations, businesses, and also Rotary Clubs across the country,” said Murray.

To support ShelterBox’s mission, tax deductible donations to the organization can be made at http://www.ShelterBoxUSA.org or by calling (805) 608-2400.

About ShelterBox
Since 2000, ShelterBox has provided shelter, warmth, and dignity following more than 300 disasters in nearly 100 countries. In April 2021, ShelterBox surpassed providing support to two million people since its start in 2000. ShelterBox responds urgently to earthquakes, volcanoes, floods, hurricanes, cyclones, tsunamis, or conflict by delivering boxes of essential shelter, aid and other lifesaving supplies. Each iconic green ShelterBox contains a disaster relief tent for an extended family, blankets, a water filtration system, emergency lighting, and other tools for survival. ShelterBox USA is based in Santa Barbara, California. To schedule an interview with ShelterBox USA President Kerri Murray, please contact Communications-PR Manager Greg Padgett at 678-977-9375 or at GPadgett@ShelterBoxUSA.org.

ShelterBox provides shelter and resources on Dominica in the Windward Islands after the impacts of hurricanes Maria and Irma in 2017.