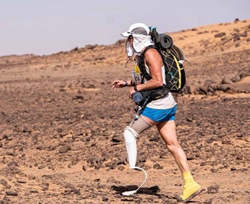 At an early age, Palmiero-Winters, competed in track and distance running. But in 1994 she was involved in a motorcycle accident that crushed her left leg. For three years, she underwent over twenty surgeries in an attempt to salvage the leg, ultimately having to have her leg amputated below the knee.

It would be another three years after the amputation before she would be able to run again. For a number of years, she ran on a prosthetic leg only meant for walking, successfully competing in several marathons and triathlons. When Palmiero-Winters decided to engage in running on a more serious level, she decided to obtain a highly customized prosthetic leg from A Step Ahead Prosthetics in Hicksville, New York. “I was in a leg and running in just five days,” she said.

In 2009, Palmiero-Winters decided to switch from marathons to ultramarathons, which are races longer than the marathon distance of 26.2 miles. She finished first overall at the Arizona Road Racers Run to the Future twenty-four-hour race on December 31, 2009 by running 130.4 miles during the allotted time. It was the first time an amputee had won an ultramarathon. Throughout her running career, she would continue to have a series of first, breaking barriers and shattering records.

She would win ESPN’s ESPY Award as the top female athlete with a disability in 2010. She currently holds nearly a dozen world records in various events.

As she set her sight to become the first below-knee female amputee to complete the Marathon Des Sables, she saw some similarities and some differences between this competition and some of the other ultramarathons she has ran. “Carrying required gear is nothing new,” she said. “But making mandatory stops every day was different. It would have been easier for me to continue all the way through.”

Palmiero-Winters was part of a Disabled Sports USA team led by board member Alf Garner, of Willis Tower Watson, which is participating to raise funds for the 50-year old adaptive sports organization. Individuals can still support the team’s efforts by visiting http://www.disabledsportsusa.org. Founded in 1967 by disabled World War II and Vietnam Veterans, today DSUSA serves over 60,000 people with disabilities annually through more than 130 chapters operating in over 40 states. DSUSA's vision is to ensure that every person, regardless of ability, has an equal opportunity to participate in sports and recreation in their communities. The mission of DSUSA is to provide national leadership and opportunities for individuals with disabilities to develop independence, confidence, and fitness through participation in community sports, recreation and educational programs. Disabled Sports USA's motto reflects this mission: "If I Can Do This, I Can Do Anything!"