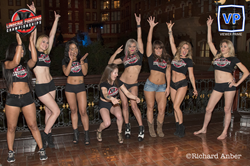 “We’re excited to work with Viewer Prime and give our fans a way to catch up with past seasons of our reality series,” CEO Shaun Donnelly says. “Season 1 is already streaming.”

Viewer Prime is a subscription based streaming platform that offers premium original programming for a nominal monthly fee. VP’s Business Development Director Thomas Calise says they were eager to work with LFC because the content is unique and appeals to a very large audience. He adds, “LFC shares Viewer Prime’s business philosophy: give viewers more than they paid for.”

LFC Exposed! pulls back the curtain and takes viewers behind the scenes of the world’s most controversial MMA league. In the first season fighters and coaches make their way from Las Vegas to Sacramento and then to the Robinson Rancheria in Nice, CA for LFC21: Naughty ‘n Nice. “That was a wild event,” Donnelly says. “It was the first for new LFC Prez Maxine Frost and she wasted no time shaking things up.” After witnessing a fight on the bus ride to the venue Frost may have decided it would be better to rule with an iron fist than let the fighters walk all over her.

“At Viewer Prime our goal is to keep subscribers engaged and entertained,” Calise adds, “and LFC Exposed! certainly does both! Whether you’re already a fan or this is your first exposure to LFC you’ll want to binge watch all the episodes.”

Viewer Prime is an entertainment company founded in the Silicon Valley by the EFC Investment Group. It specializes in original content programming that connects content creators of all kinds with their fans.