A reflection of the current political environment, Outside The Box Software brings a unique political game to iOS and Android. 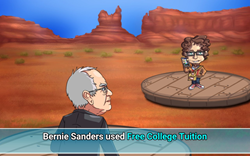 ...once you play for more than 15 minutes, you realize the game pokes fun at everyone across the political spectrum.

Outside The Box Software (http://www.otbsgames.com), a small Indie game studio, releases the timely satirical Turn Based RPG Polimon – Political Monsters. At first glance it may seem like a gimmick, but after just a few minutes playing it becomes apparent there’s a lot more to this genre blending game than meets the eye.

Featuring over a dozen famous and infamous U.S. politicians from the past 2 decades, Polimon allows players to take control of their favorite (or most hated) U.S. Presidential candidate. From the omnipresent Donald Trump, Joe Biden, and Bernie Sanders to fringe candidates like Kanye West. As the player’s chosen Political Monster, they will travel across the land, gaining supporters, and engaging in political battles.

The battle system parodies the classic Turn-Based RPG Trainer system while satirizing political candidates and various supporters and interest groups. “If you play the game for 5 minutes, you might get offended and send me hate mail,” says Christopher ‘Cosmo’ Evans the Lead Developer and Game Designer of Polimon at Outside The Box Software. “But once you play for more than 15 minutes, you realize the game pokes fun at everyone across the political spectrum and it also illuminates how we actually have a lot of shared interests outside of a few hot button issues.”

Polimon – Political Monsters contains over 30 hours of gameplay with a planned Online Multiplayer battle mode in the works. New Polimon will be added regularly featuring not only current politicians like ‘AOC’ but also “Legendary Polimon” such as Abraham Lincoln and Richard Nixon each with their own special movies and abilities. Polimon looks to be one of the more accessible political games to date. “Typically political games fall into two categories. They are either too esoteric requiring a near political science degree to understand or they’re too simplistic reducing the politics to whack-a-mole,” says Christopher Cosmo. “With Polimon, the idea was to create accessible and engaging gameplay that even a non-politico can do a play-through and maybe even pique their interest in politics, but also have enough depth and satire that political junkies will appreciate and have fun digging deeper.”

About Outside The Box Software: Outside the Box Software is a small Indie game company that's been developing games since 2004. They started out developing desktop shareware games then migrated to making web-based multiplayer games and the popular teen virtual world, SocioTown. Nowadays, they are focused on mobile and console development.