An Old Man Time-Travels Back to his Youth, to Live it Again with the Benefit of a Lifetime’s Experience; ‘The Old Man’s Tale’ is a Story of Lust, Greed, and Betrayal

Ian Curwood’s new novel covers a familiar theme, “If only I could live my life again with what I know now”. The old man is given the power to fulfill this dream, to live his fantasies, but there is a price to pay for disturbing the natural order. 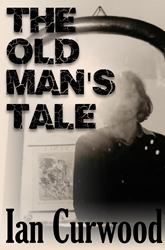 [‘The Old Man’s Tale’] is about failure to appreciate what is really valuable in life, about greed and lust, the betrayal of youth by selfish old age, loneliness, but finally, redemption.

Ian Curwood's ‘The Old Man’s Tale’ opens with George in his old age, lying in bed thinking about his past romantic encounters, their successes and failures, the mistakes he has made, and how he could have done things better. While imagining these encounters, he discovers he has the power to travel back to his youthful years, to relive his life with his mature mind and knowledge. Such a move would be irrevocable, erasing his current life and wiping out his children, but gradually the temptation becomes irresistible. He adores his wife Eleanor, and plans to meet her again, but only once he has had affairs with numerous women. He also intends to become rich by using his knowledge of sporting fixtures which have occurred, betting on them and investing the winnings.

George successfully time-travels back to his university days in a small Welsh town. He is determined to take chances, to live life to the full, and so begins a series of romantic and sexual encounters. He fulfills all his fantasies and becomes rich and successful. Then things begin to go wrong. The scene shifts to London, where he meets his wife Eleanor anew, with unforeseen consequences. Finally, we meet him, an old man again in a hospice, at the end of his second life, plotting to go back yet again, to construct a perfect life. This would erase the children of his second life, but George has become totally self-centered, monstrous.

Ian Curwood’s novel includes sexual encounters and is not for children. It is about failure to appreciate what is really valuable in life, about greed and lust, the betrayal of youth by selfish old age, loneliness, but finally, redemption. Apart from time travel, a supernatural thread runs through the novel, focused on the dangers of over-reaching and violating the natural order. It has echoes of ‘The Picture of Dorian Gray’, ‘Dracula’, and ‘Dr Faustus’.

‘The Old Man’s Tale’ is available as an e-book from eBookIt.com, Amazon.com, BN.com, Apple iBooks, and other outlets.

About Ian Curwood
Ian Curwood is a psychologist living in the North of England. He is interested in the way people come to terms with their past lives, their successes and regrets, and how they maintain their self respect.