An Owner’s Manual for Consciously Evolving Your Consciousness

Recent release “An Owner’s Manual for Consciously Evolving Your Consciousness” from Page Publishing author Don McCrea-Hendrick contains both a thoughtful exploration of the intersection of philosophy and spirituality, and a freewheeling and suspenseful murder mystery. 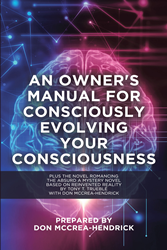 Don McCrea-Hendrick is a US Army veteran who served in the Secret War in Laos as a top secret operations specialist who has returned to his native Texas after a lengthy residency in California, where he founded, sold, and repurchased a successful medical accounting firm. He has published his new book “An Owner’s Manual for Consciously Evolving Your Consciousness”: a fascinating and uplifting exploration of the myriad paths to spiritual and intellectual enlightenment.

The author writes, “This ‘Owner’s Manual’ provides you with detailed ways to Consciously Evolve Your Consciousness while addressing other important related issues: The Brain and How to Use It, The Law of Giving and Receiving, How to Meditate, How to Chant Nam Myōhō Renge Kyō, Wishing People a Happy Life, The Probability of Being Born, Spiritual Philosophy, Neuroscience and Neurogenesis (how to grow new stem cells), Evolution of the Subconscious Mind. By the time you read this Owner’s Manual, you will be on your way to evolving your own consciousness.

Included with this ‘Owner’s Manual’ is the novel ‘Romancing the Absurd’, a story of redemption for two of the characters who dabble in consciously evolving their consciousness.

When financial investigator Tony T. Trueblé is hired to interview key players in a major lawsuit against a venture capitalist group, his world is turned upside down as he is dragged through a seedy underworld of corruption, dishonesty, and murder. He must not only get the job done but do so without giving into his insatiable cravings for vodka, weed, and causal, meaningless sex.

Sensational, satirical, and sometimes absurd, ‘Romancing the Absurd’ is a literary murder mystery full of intrigue, suspense, philosophy, and absurdist cutthroat behavior. Nine people die under bizarre circumstances. A handful of people get screwed (in more ways than one). The story takes humorous and philosophical twists and turns, leaving you laughing at the murderous tactics some folks are willing to use to get ahead in this world.

Throughout the story, there runs an undercurrent of reflection, hope, and redemption for Tony, who strives to right his wrongs, and Jim der Bacon, accused of murder yet able to focus on consciously evolving his own consciousness.

For Tony, redemption comes through writing and his new awareness that one can consciously evolve their consciousness. Romancing the Absurd is the final result of Tony’s studies, hard work, and shocking struggles with himself, others, and the universe at large.

Based on real-life venture capitalists, businessmen, and lawyers, the story is structured using reinvented reality.”

Published by Page Publishing, Don McCrea-Hendrick’s engrossing book is an excellent choice for readers interested in a deeper contemplation of their spiritual life.

Readers who wish to experience this engaging work can purchase “An Owner’s Manual for Consciously Evolving Your Consciousness” at bookstores everywhere, or online at the Apple iTunes store, Amazon, Google Play, or Barnes and Noble.