Andrea Sherman’s newly released “A Tumultuous Life: A Story of a Little Girl Who Rose Above Adversity” is an empowering story of survival

“A Tumultuous Life: A Story of a Little Girl Who Rose Above Adversity” from Christian Faith Publishing author Andrea Sherman is a poignant exploration of the author’s life through abuse, neglect, and ultimately finding a sense of peace through God. 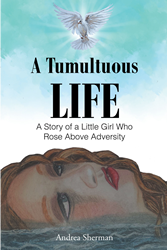 Sherman shares, “A Tumultuous Life: A Story of a Little Girl Who Rose Above Adversity is an unforgettable account of a girl named Andrea who struggled with one traumatic event after another. In this story, you will read the riveting events of sexual abuse by the hands of her own brother and how her emotionally distant mother neglected her mental health, which sent Andrea into a whirlwind of isolation, depression, suicide attempts, an eating disorder, and self-harming behavior.

“Just when she thought there was no way out, a family took her in as one of their own when she was seventeen. She was finally getting away from her cold distant mother who she felt chose her brother over her. Andrea soon found out that no matter how hard she tried, she could never run away from her past. She struggled with finding a new sense of normal and, out of pure desperation, kept finding herself in more trouble. The demons that haunted her since she was a little girl affected every facet of her life from her relationships to every decision into adulthood.

“Throughout her life, Andrea struggled with finding herself and her will to live after facing so many trials and tribulations. Andrea, who was like a wounded bird—vulnerable and easy prey, desperate to escape this tangled web of crafty deception—found herself dating the embodiment of her past, a real monster who abused her verbally and sexually. As she struggled to escape the grips of the Devil himself, she faced a near death experience where God showed her what real hell really looked like if she went through with killing herself. She soon realized that she would be escaping one hell for a more permanent one. With the help from friends, she managed to escape yet again.

“Find out how Andrea managed to finally put the past behind her by relying on her faith in the only one who could save her—Jesus Christ—and how He brought her through the thickest of storms in this gut-wrenching story that will leave you reaching for a box of tissues.”

Published by Christian Faith Publishing, Andrea Sherman’s new book is a heartrending story of a woman’s resilient spirit against all odds.

Sherman shares a private look at the circumstances and experiences which led her down a dark and painful road that ultimately led to salvation through Jesus.

View a synopsis of “A Tumultuous Life: A Story of a Little Girl Who Rose Above Adversity” on YouTube.

Consumers can purchase “A Tumultuous Life: A Story of a Little Girl Who Rose Above Adversity” at traditional brick & mortar bookstores, or online at Amazon.com, Apple iTunes store, or Barnes and Noble.

For additional information or inquiries about “A Tumultuous Life: A Story of a Little Girl Who Rose Above Adversity,” contact the Christian Faith Publishing media department at 866-554-0919.