Andrew Hoesman’s newly released “Andromeda: A War Beyond” is an enthralling tale of a war between two planets that lasted for several centuries

“Andromeda: A War Beyond” from Christian Faith Publishing author Andrew Hoesman is an engrossing story that takes readers on a riveting journey through space as a deadly threat looms on the horizon. 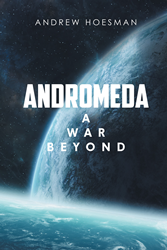 Hoesman writes, “Far away in the distant galaxy of Andromeda, there is a confrontation that has lasted for over two hundred years. Two races in total conflict over a planet the size of Jupiter. World-encompassing unlimited resources that could sustain any race for life. Protagonists have lived in this world since the beginning of time, understanding its contents and its uses as this planet is on one side of their galaxy.

“The other side of this galaxy, the antagonist’s planet, is the size of Mars, almost barren like the Sahara Desert. Antagonists want to claim this new world for themselves by getting rid of these humanoids, taking over their planet. Since their world’s condition is deteriorating, they spread their dark wings in their system, claiming the other four worlds, and taking their culture and their precious treasures like water, which life needs to thrive. To strike a blow on these humanoids, antagonists ignite a vile plot by sending three King Cruisers on a special mission, staking entitlement on this world and its entire system.”

Published by Christian Faith Publishing, Andrew Hoesman’s new book is a captivating tale of conflict, greed, need and the required strength of character to overcome it all as a long-standing interplanetary clash come to a head.

With this book, Hoesman takes readers to places never before seen to witness the dangerous repercussions of war.

View a synopsis of “Andromeda: A War Beyond” on YouTube.

Consumers can purchase “Andromeda: A War Beyond” at traditional brick & mortar bookstores, or online at Amazon.com, Apple iTunes store, or Barnes and Noble.

For additional information or inquiries about “Andromeda: A War Beyond,” contact the Christian Faith Publishing media department at 866-554-0919.