More savings with WiFi calling and more phone choices - As part of its new ‘Bring Your Own Phone’ strategy, Republic Wireless to support same day activations of new Android smartphones. 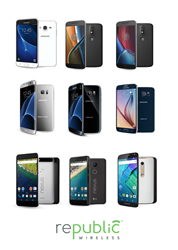 Where it used to take months to certify new phones for our network and restricted our phone selection to one manufacturer, we can now support the latest Android devices from all manufacturers on the same day as the Big 4 carriers.

WiFi calling innovator Republic Wireless today demonstrated how rapidly it can now support new Android smartphones on its network. As part of its recently launched ‘Bring Your Own Phone’ (BYOP) program, Republic Wireless will allow customers who buy the Google Pixel or the Pixel XL smartphones to activate the phones on its network the first day the phones are available, late this October.

Available in three colors (Quite Silver, Really Blue, and Very Black), two storage options (32GB and 128GB), and starting at $649 for an unlocked version, Google’s new phones are loaded with the latest tech like Google Assistant, Daydream Virtual Reality, and unlimited storage for photos. Google is currently taking pre-orders for the new Pixel smartphones on its website. Both the Google Pixel and Pixel XL, will ship with the latest version of the Android operating system Nougat. While waiting for the phone, customers can order a Republic Wireless SIM card at http://www.RepublicWireless.com for just $5.

“Pop the Republic Wireless SIM into the Google Pixel or Pixel XL and customers can begin recognizing immediate savings with plans that start as low as $15 a month,” said Chris Chuang, Chief Operating Officer of Republic Wireless.

“It’s a very exciting development. We worked hard to move our hybrid WiFi/cellular calling and Adaptive Coverage™ technology out of the phone’s ROM and into the cloud, which opens up our network to a wide selection of Android smartphones. Where it used to take months to certify new phones for our network and restricted our phone selection to one manufacturer, we can now support the latest Android devices from all manufacturers on the same day as the Big 4 carriers.”

Bring Your Own Phone quickly follows on the heels of other exciting news for Republic Wireless. Widely recognized as the industry’s leading WiFi-first innovator, Republic has steadily raised the bar for WiFi calling quality and offers the industry’s most robust seamless handover with new technology such as ‘Adaptive Coverage™’ enabled with Bonded Calling™, which catches dropped calls before they even happen.

“From the beginning, our hallmark has been to use engineering innovation to unlock value for customers. That began with WiFi calling and Adaptive Coverage, and today extends to giving our customers access to the latest Android phones on the first day they are available,” Chuang adds.

Recognized for excellence in customer service by PC Magazine and as the top pre-paid carrier choice by Consumer Reports, Republic Wireless is on a mission to use technology in smarter ways to save you money. A division of Bandwidth, headquartered in Raleigh, North Carolina, Republic Wireless leverages the power of both WiFi and cellular networks and gives consumers the ultimate flexibility to manage costs. The service uses WiFi in the home, office or anywhere else as the primary network for calls, texts and data. When outside of WiFi coverage, the smartphone works just like a typical smartphone on the cellular networks of national CDMA carriers. Visit http://www.republicwireless.com/ for more information. Media resource center here.

WiFi Calling goes mainstream - Republic Wireless offers unlimited data, talk and text for as little as $15 a month and a full portfolio of Android smartphones for every budget.