“Seven Towns and Seven Rivers: The Maiden Crossings” from Christian Faith Publishing author Anen’ Martin is a suspenseful story about a man who gains otherworldly powers and causes mayhem in his town and his mother’s life. 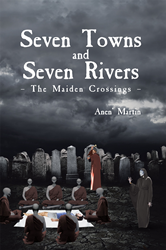 Martin shares, “As the image Simeon tattooed on his leg endowed him with some supernatural powers and took over his life, it also put him at odds with the law. With his powers, he exerted severe revenge against anyone who dared offend him. He gained notoriety for what many in the town regarded as evil and unacceptable behavior.

“When the police and many in his town no longer found his mere existence deserving, plots to permanently remove him were initiated. But his mother saw his peculiarity as a condition for which a medical intervention would be necessary. She consulted with a medical doctor, only to find out that her son’s condition could not be mitigated by modern medical practice and that what he was faced with was not of the temporal nature. Therefore, she needed to explore other avenues if she wanted his life preserved.

“Her referral to seek an unconventional solution from unconventional source led her to uncover that his problems had their origin beyond their land and that she would have to seek answers in a faraway land shared by the dead and the living. This journey would be anything but easy, crossing seven towns and seven rivers of tribulations.”

Published by Christian Faith Publishing, Anen’ Martin’s new book is a mesmerizing compendium of mystical events that cause danger and death where only love and sacrifice can bring light and justice to the fallen.

This book also realizes the unyielding strength of a mother whose compassion for her son draws her to a distant and perilous land to redeem his broken soul.

View the synopsis of “Seven Towns and Seven Rivers: The Maiden Crossings” on YouTube.

Consumers can purchase “Seven Towns and Seven Rivers: The Maiden Crossings” at traditional brick-and-mortar bookstores or online at Amazon.com, Apple iTunes store, or Barnes and Noble.

For additional information or inquiries about “Seven Towns and Seven Rivers: The Maiden Crossings,” contact the Christian Faith Publishing media department at 866-554-0919.