Angela Jeffries’s newly released “Naked but Not Afraid: The Struggles of a Single Parent” shares a single mother’s unwavering faith throughout toils in life

“Naked but Not Afraid: The Struggles of a Single Parent” from Christian Faith Publishing author Angela Jeffries is a gripping novel of a single parent’s moments of grace and determination despite meeting life’s hurdles. 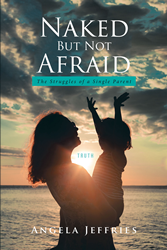 Jeffries shares, “Who is the author that dares to tell the naked truth about her less-than-perfect life as a Christian single parent? Angie was the shy younger sister who grew up in a Christian family in a small Midwestern town of approximately three thousand residents. She accepted the Holy Spirit into her life at the age of ten years old. Angie’s aspirations after high school were to marry a Christian man, have children, and settle down in her hometown, but instead, she attended college five hours away from home. Taken with homesickness, she returned to her hometown after a year and completed a teaching degree at a community college fifteen miles from home. How did God transform this small-town homebody with average intelligence into a missionary willing to serve God halfway around the world on a North Pacific island? But what caused her to settle for ungodly relationships upon her return home and equipped her to survive an abusive marriage? How did she manage financially on a thirty-two-hour-per-week income, as well as raise her daughter to love the Lord while fighting off the forces of evil? Angie prays the stories in the book will inspire you through difficult times as a single parent. She also believes the time management and budgeting tips will allow you to spend more time with your child(ren) and less at work and chores at home. Do not be afraid to disclose your naked truth to God in prayer. No one is too broken for His healing grace.”

Published by Christian Faith Publishing, Angela Jeffries’s new book is proof of the Lord’s graciousness for people who seek Him, especially during times of despair that dampen the soul’s will to thrive.

Readers will follow a single mother as she painstakingly juggles between being a parent extraordinaire and a devoted physical therapist assistant rehabilitating the injured and sick.

View the synopsis of “Naked but Not Afraid: The Struggles of a Single Parent” on YouTube.

Consumers can purchase “Naked but Not Afraid: The Struggles of a Single Parent” at traditional brick-and-mortar bookstores or online at Amazon.com, Apple iTunes store, or Barnes and Noble.

For additional information or inquiries about “Naked but Not Afraid: The Struggles of a Single Parent,” contact the Christian Faith Publishing media department at 866-554-0919.