“Lily Among Thorns: Song of Solomon 2:2 In the Last Days 2nd Peter 3:3” from Christian Faith Publishing author Annette K Mazzone is a magnificent narrative of a young woman who keeps her faith in a time when her religion is a sin and being a believer will cost one’s life. 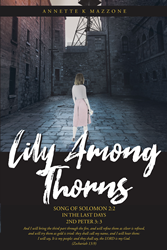 Mazzone shares, “The Twentieth Century should have taught humanity how it is the world could spin out of control and be led into two World Wars, when a tyrannical ruler seizes power. But sorry to say the worst is yet to come, and here in the first decades of the Twenty-First Century. The current woes of society will lead to an antichrist. The ‘Global Leader’ the Bible speaks of as ‘that Man of Sin,’ as it is written in 2nd Thessalonians 2:3, ‘Let no man deceive you by any means: for that day shall not come, except there comes a falling away first, and that man of sin be revealed, the son of perdition’

“The consequences thereof is what happens when the Bible-believing Christian becomes enemy number one in this ‘New Oppressive World Order.’ Here is the story of one such young woman in her mid-twenties, whose horrific crimes against humankind is her love for the Lord and her belief in the Bible as it is written. She is but one of many and through the tremendous loss of family and love. With the long arm of the law ramping up a complete surveillance society, she manages to keep the faith and, along the way, finds the faith of others are everywhere, and as it is written in Genesis 50:20, ‘But as for you, ye thought evil against me; but God meant it unto good, to bring to pass, as it is this day, to save much people alive.’”

Published by Christian Faith Publishing, Annette K Mazzone’s new book is an inspiring and thought-provoking story about a brave young woman who refuses to bow down to authority and renounce her faith despite the dangers it places her in.

View a synopsis of “Lily Among Thorns: Song of Solomon 2:2 In the Last Days 2nd Peter 3:3” on YouTube.

Consumers can purchase “Lily Among Thorns: Song of Solomon 2:2 In the Last Days 2nd Peter 3:3” at traditional brick & mortar bookstores, or online at Amazon.com, Apple iTunes store, or Barnes and Noble.

For additional information or inquiries about “Lily Among Thorns: Song of Solomon 2:2 In the Last Days 2nd Peter 3:3,” contact the Christian Faith Publishing media department at 866-554-0919.