Cuadro 44 by Anthony Sasso will be located on the award-winning small ship line’s three renovated Star Class ships, debuting in 2020. 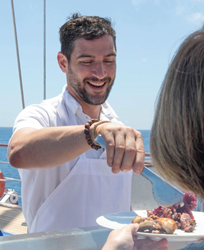 With Cuadro 44, Chef Anthony Sasso promises a menu of modern and inventive Spanish cuisine inspired by his own travels across the Iberian Peninsula.

Chef Sasso exemplifies culinary leadership as evidenced by his ten years of Michelin Stars and we are thrilled to be working with him on this new Spanish restaurant that expands and elevates our culinary offerings with on trend, tapas-style cuisine that encourages experimentation.

Windstar Cruises is taking its culinary program to the next level with its latest partnership: a new specialty restaurant named Cuadro 44 in partnership with renowned chef, Anthony Sasso. One of the youngest chefs to be recognized by the Michelin Guide, and celebrated guest chef at the James Beard House, Sasso promises a menu of modern and inventive Spanish cuisine inspired by his own travels across the Iberian Peninsula. Cuadro 44 by Anthony Sasso will first debut on Windstar’s award-winning small ships, beginning in February 2020 on Star Breeze, and later in 2020 on sister ships Star Legend and Star Pride as part of the $250 Million Star Plus Initiative.

Sasso is known for his groundbreaking work at New York restaurant Casa Mono, where he spent 13 years and earned the restaurant a Michelin star 10 individual years. Sasso’s connection to Windstar began in 2018, as guest chef on a James Beard Foundation Culinary Collection themed cruise in the Mediterranean. As an expert culinary guide on the Spanish Symphony sailing, Sasso led cruise guests on small-group “Shopping with the Chef” walking tours to local markets to procure fresh produce and local specialties to use in his onboard cooking demonstrations and wine-paired dinners.

“I've spent a lifetime studying Spanish food and culture, working in several Catalan kitchens, traveling the Iberian landscape and learning from and getting inspired by the masters: everyone from the Roca Brothers of El Celler de Can Roca to the unmatchable Pablo Picasso,” says Sasso. “This new venture with Windstar will be the perfect vehicle to showcase the universally enticing flavors of Spain and its coastal seas. I'm extremely excited and honored to be involved with this innovative company.”

“Culinary leadership is one of our core competencies at Windstar, and one of the reasons we are consistently awarded as the leader in small ship cruising,” says Peter Tobler, Director of Hotel Operations. “Chef Sasso also exemplifies culinary leadership as evidenced by his ten years of Michelin Stars and we are thrilled to be working with him on this new Spanish restaurant that expands and elevates our culinary offerings with on trend, tapas-style cuisine that encourages experimentation.”

The announcement of the culinary partnership and Cuadro 44 was made by Windstar’s President John Delaney and Chef Sasso during an intimate media event in New York City at Bar Jamón, the adjacent sister bar to Casa Mono on June 25, 2019.

The Cuisine: Sasso has been praised for his interpretations of classic Spanish staples, which he serves with modern imagination. Sasso plans for the Cuadro 44 menu to showcase all of the coastal areas of Spain, stretching from the Basque region to the northern Cantabrian Sea to the Mediterranean-tinged eastern parts of Catalonia, Valencia, and Alicante. He will also explore the cuisines from southern, sun-kissed Andalusia and Jerez, heavily influenced by North African spices.

The Dishes: Dining at Cuadro 44 will give guests the rare opportunity to try legendary jamón ibérico, a 24-month aged pork made from black pigs raised solely on acorns in Southern Spain, almost exclusively served in Spain. Other exciting dishes that experienced and aspiring foodies alike will enjoy include: lamb chops from Catalonia, served with a mint salsa verde, green apples, kohlrabi, and manchego; or enticing pulpo gallego, Galician-style octopus, a popular tapa served around Spain, paired with Yukon gold potato salad, pimentón, and pickled celery vinaigrette. End the evening in true Spanish style with churros y chocolate from Madrid, cinnamon and sugar-coated fritters served with spicy hot chocolate and fresh seasonal fruit. The perfect way to end a Spanish meal.

The Design: Cuadro 44’s design will be just as exciting as the cuisine, thanks to the work of Ray Chung, Director of Design for The Johnson Studio at Cooper Carry, an innovative architectural and design firm known for creating revolutionary restaurant spaces around the globe. Set on Deck 6, Windstar’s new restaurant will seat 38 and feature a chef’s counter and communal table perfect for small-plate and family-style dining.

Chung says he drew inspiration from the various regions of Spain, employing a warm and approachable design that recalls the feeling of a rustic home. “The residential scale combined with soft, indirect lighting creates an intimate atmosphere where guests are surrounded by the sights, smells, and tastes of Spain,” says Chung. “Handcrafted details and colorful, intricate patterns provide a richness reminiscent of Andalusia, and playful wall and furniture accents capture the whimsy of Barcelona.”

Other design elements include wine displays and tiled floors with a mosaic of colors. A highlight of Cuadro 44 will be experiencing the chef’s counter, where guests can watch the culinary team in action.

The Name: Cuadro 44 translates to “Frame 44” in Spanish. When ships are built, the vessel is mapped out in sections called frames. Cuadro 44 is the ship’s numeric “address” for where the new restaurant will reside, inside frame 44. This clever nautical nod to the exact location on the ship was inspired by street names of famous land-based restaurants. Similarly, the logo took inspiration from the iconic art and eye of Pablo Picasso, one of Spain’s best loved artists.

The Setting: Windstar’s newest restaurant concept and the creation of this brand-new dining space is part of Windstar’s $250 Million Star Plus Initiative, to be featured on the line’s three, soon-to-be-renovated Star Class ships, that will carry fewer than 312 guests on each cruise. The extensive renovation of these small cruise ships also features the addition of 50 new suites, a second dining concept to be announced later this year, an enhanced spa and fitness center, an elevated pool, new retail space, more deck space, and additional upgrades.

Cuadro 44 by Anthony Sasso, will debut first on Star Breeze in February of 2020; followed by introductions aboard Star Legend in July of 2020, and Star Pride in November 2020. Fitting with the Spanish cuisine concept, the first ports of call for all three ships’ post-renovation, will be in Spain – the perfect setting to visit Cuadro 44 for a taste of the region.

The Background: The Official Cruise Line of the James Beard Foundation, Windstar delivers elevated epicurean experiences for guests to delight in the best cuisines from around the world. The boutique line has hosted more than three dozen James Beard Foundation-celebrated chefs, sommeliers, and beverage experts since 2016, including Chef Sasso. Destination-inspired recipes developed for each culinary cruise are available fleet-wide for all guests to enjoy on Windstar menus every evening.

In 2019, Windstar has garnered culinary accolades as the Best Small Cruise Ships for Dining from both USA Today and Cruise Critic, and received Porthole Cruise Magazine’s 2019 Editor-in-Chief Award for Best Cruise Partnership: Windstar and the James Beard Foundation.

To learn more about Cuadro 44 by Anthony Sasso, and authentic small ship cruising, contact a travel advisor or Windstar Cruises by phone at 1-800-258-7245, or visit http://www.windstarcruises.com.

Cuadro 44’s design is the work of Ray Chung, Director of Design for The Johnson Studio at Cooper Carry, an architectural and design firm known for its revolutionary restaurant spaces around the globe.