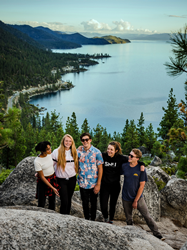 On the eve of its 50th commencement, Sierra Nevada College, Nevada’s only accredited non-profit university is undergoing a name change to Sierra Nevada University. The change in its name comes as the institution reorganizes for the future and seeks to represent itself, after 50 years of growth, more accurately. Founded in March of 1969, the institution admitted its first class of 23 students in September, followed by Governor Paul Laxalt’s dedication of the campus on October 2, 1969. Within four years of its founding, the College achieved candidate status for accreditation by the Northwest Commission on Colleges and Universities, and accreditation was granted in 1976. Now, with the approval granted by the NWCCU, Sierra Nevada College will become Sierra Nevada University beginning this semester.

Situated in Incline Village, initially on College Drive, the Mountain Campus grew, adding Music and Art departments, and attracting teachers from the many artists and musicians who make their homes in the Lake Tahoe area. Continuing to draw from its community, which includes many successful entrepreneurs, SNC soon formed the Department of Management, now its Business Department. The initial concentrations of Entrepreneurship, Ski Business and Resort Management, and International Business (Now Global Business Management) remain today as key offerings, unique in design and headed by professor-practitioners who call Tahoe home.

Formed in 1989, the Teacher Education Program grew from its beginnings as a fifth-year post-baccalaureate program to become the first of the institution’s graduate-level programs in 2004. Teacher Education was followed by the Master of Fine Arts (MFA) Program in Creative Writing program in 2012 and the MFA in Interdisciplinary Arts in 2015. Both of these new programs, MFA-CW and MFA-IA, follow an innovative low-residency format that combines distance learning with intensive residencies at the Incline Village campus that meet twice a year over the course of their two-and-a-half year programs.

With its growth, it soon became apparent that SNC needed a new campus. In 1991, through private and foundation donations, the current 20-acre site of the Lake Campus, at the corner of Country Club Drive and Tahoe Boulevard, was acquired. In the ensuing years, the campus added 2 residence halls, administrative offices, the Prim Library, The Holman Arts and Media Center, and the Tahoe Center for Environmental Sciences.

This past June, after the retirement of President Alan Walker, Dr. Ed Zschau stepped in as Interim President. Under his leadership, the Incline Village Campus has become the home of the College of Entrepreneurial Leadership. As Dr. Zschau shared on KTVN’s Face the State, “Entrepreneurship isn’t about creating companies, entrepreneurship is an approach to life. It’s about making good things happen. It’s about starting things from scratch that create value for others.” The name changes represent a drive to focus on the key features of the small, high-touch, interdisciplinary campus focused on learning-by-doing, involved professors and mentors, all in an incredible and challenging location.

For more information on the changes at Sierra Nevada University, its graduate programs, and the College of Entrepreneurial Leadership, visit sierranevada.edu, or contact admissions@sierranevada.edu.