The second tranche of its two-phased EB-5 investment in the Gulfport Marine Terminal, located in Staten Island, NY, was repaid today, bringing total repayments by CanAm’s EB-5 projects to date to more than $1.4 billion in EB-5 capital repayments. 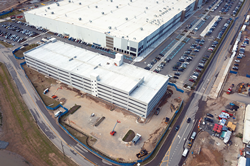 "...the development has brought significant job creation to a borough of New York City that could really benefit from it. We are proud to have contributed through the EB-5 program to the creation of this important facility,” said Tom Rosenfeld, President and CEO of CanAm Enterprises.


CanAm Enterprises (“CanAm”) is thrilled to announce that another of its EB-5 investments has repaid in full and on-time. A total $50 million EB-5 investment raised in two phases was made in the Gulfport Marine Terminal project in Staten Island, NY to develop a 674-acre tract of vacant land located on the Arthur Kill waterfront into a more than 2 million square foot industrial logistics center and eventual marine terminal. The first tranche was repaid in December 2018, and the second tranche was repaid today. The development has created 1,671 jobs, which far exceeds the EB-5 investment requirements of 10 jobs per investor.

“The Gulfport Marine Terminal Project has brought enormous economic benefits to the local economy in New York’s Staten Island, converting a former oil tanker farm that had been vacant for decades into a state-of-the-art transportation and logistics terminal that maximizes the advantages of the location on the waterfront and with direct access to rail and highways. Most importantly, the development has brought significant job creation to a borough of New York City that could really benefit from it. We are proud to have contributed through the EB-5 program to the creation of this important facility,” said Tom Rosenfeld, President and CEO of CanAm Enterprises.

The Gulfport Marine Terminal was built on a 674-acre tract of vacant land located on the Arthur Kill waterfront in Staten Island, Richmond County, New York. The terminal features a 193-acre on-site logistics center as well as an additional 135-acre tract that is intended to be developed into a full-service port facility. Ikea took occupancy of a 1 million square foot building in August 2018, and Amazon opened an 850,000 square foot robotics-enhanced fulfillment center in September 2018. The opening of this second facility was significant in that it marks the first fulfillment center Amazon has located within New York City. Both companies are the largest employers in the borough, bringing even more economic growth and opportunities to Staten Island, NY.

The EB-5 Immigrant Investor Program (EB-5 Program) is administered by the United States Citizenship and Immigration Services (USCIS). The EB-5 Program provides qualified foreign investors with the opportunity to earn a conditional, or temporary, two-year green card in return for investing $900,000 in projects located in high unemployment areas that create at least ten permanent full-time jobs for U.S. workers.

About CanAm Enterprises
With three decades of experience promoting immigration-linked investments in the United States and Canada, CanAm has a long and established track record. Basing its business on a reputation of credibility and trust, CanAm has financed 60 projects and raised $3 billion in EB-5 investments. More than $1.4 billion in EB-5 capital from over 2,800 families have been repaid by CanAm’s 41 projects to date. CanAm exclusively operates seven USCIS-designated regional centers that are located in the city of Philadelphia, the Commonwealth of Pennsylvania, the metropolitan regions of New York & New Jersey, the states of California, Hawaii, Florida, and Texas. For more information, please visit http://www.canamenterprises.com.