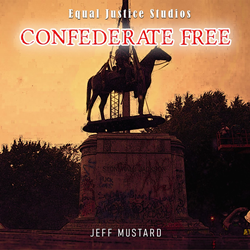 "There is a poetic irony to the song Confederate Free delivered as a Gospel tune," says tv/music writer, Jeff Mustard, "it reflects the pain of slavery in which the curtain is finally pulled back on the hypocrisy of this country's founding, and its founding fathers, and the falsehood of equality."

As the Robert E. Lee Statue comes down in Virginia, effectively the capital of the Confederacy and a bastion, at least historically, of slave ideology, along with the recent removal of nearly 170 other Confederate Statues across the country since the George Floyd Murder, "this movement and moment in time warrants a song to memorialize this seismic shift in our country's consciousness," says Jeff Mustard. '"Confederate Free," written specifically for Gospel delivery, is that song."

ABOUT THE SONG - "CONFEDERATE FREE"

"Confederate Free" is more than a history song," says Mustard, "it's an anthem that addresses the unvarnished hypocrisy of the nation's founding fathers." The lyrics of the first verse set the tone of the song:

Statues of men long dead are falling,
Disturbing the memory, a whitewashed history, (listen)
Cracks are forming, splintering the nation,
Exposing the facts of this country's creation.

Can you build a city on a rotten foundation?
Can you plan a future if your past is forsaken?
Can you see tomorrow when your history is blind?
Can you search your heart if you're afraid of what you'll find?

"Each element of the song, the lyrics, the music, and the vocal delivery were creatively envisioned to tap into the deepest vein of pain powerfully expressed in guttural appeals to the "Lord" that can be heard historically in churches, particularly throughout the South, the undisputed homeland of slavery," says Mustard.

"There is a poetic irony to Confederate Free delivered as a Gospel tune," says Mustard, "in which the curtain is finally pulled back on the hypocrisy of this country's founding and the falsehood of equality." Slavery has plagued our nation for hundreds of years. The sound of slavery can be heard in the "call and holler" of African-American men and women picking cotton on plantations. "I felt the sound of slavery could be profoundly heard in the pleading pain reflected in Gospel Music. Says Mustard, "The rise of consciousness in the face of historic and systemic racism in the country is the premise upon which Confederate Free was written." Delivered at a steady, but measured 80 BPM, the 400 words of the song has a message of 400 years of slavery in a 5:31 minute soundtrack."

Equal Rights, Social Justice, and Civil Rights for African Americans are at the height of our nation's consciousness for the first time since the Civil Rights movement of the 60s. Police officers' murder of black men and women in our society seems incessant, unwarranted, and sadly, more rampant than ever. The George Floyd Murder and other high-profile deaths that have followed since Mr. Floyd's tragic killing on May 25, 2020, has created not just an inflection point in our society but a passion and long overdue vigor for Equal Rights for African Americans.

Says Joe Vasquez: "In collaboration with writer/producer Jeff Mustard, my original intent was to compose something that took me back from the times I went to the local black Baptist Church my father attended. I wanted to bring that African American Spiritual Hymn vibe to the song. Bakari's talented vocals cohesively came together with the vision Jeff expressed that merged beautifully with what I imagined from the lyrics."

Joe Velasquez is a Singer, Song Writer, and Producer in the San Francisco Bay Area. Following Jazz studies at the New School University (NYC), he began his career playing at the Monterey Jazz Festival and had the opportunity to play with Singer-Songwriter Patrice Rushen and other local artists. Joe has started producing and writing music for T.V., Film, and commercials. His forte is Saxophone. Other genres covered by Joe include Dramatic, Classical, Rock, Hip Hop, and Pop.

Says Bakari Holmes: "I felt the lyrics of this song lent themselves to a modern spiritual feel. So I approached my vocal from that perspective stylistically and emotionally. I tapped into my struggles as an African American man."

Jeff Mustard is a writer and producer for various media. Jeff's print, radio, television, and stage work has been published and produced locally, regionally, and nationally. He has written two prestige historical-fiction pilot television shows in recent years, both of which have earned multiple T.V. industry accolades. During the pandemic and following the George Floyd Murder, he wrote and produced a six-track album, Enough under the media banner he created, Equal Justice Studios, addressing society's racial and social inequities. Jeff Mustard's stage play, "Chance," a 20-minute TragiComedy one-act stage play about depression, opioid addiction, and suicide, was recently produced as a Los Angeles-based Open Door Playhouse podcast. LISTEN TO "CHANCE" THE PLAY: