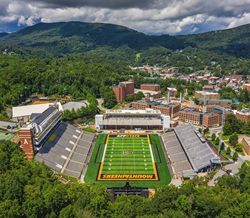 We are committed to providing a world-class experience for our student-athletes, which includes the surfaces on which they train and compete for championships

App State Football will begin this year’s season with a brand-new turf created by the original inventor of synthetic turf, AstroTurf®. This is the third recent AstroTurf® installation at Appalachian State University after the school replaced the turf at the Ted Mackorell Soccer Complex and the Jim and Bettie Smith baseball stadium in 2019, and it’s an exciting upgrade for the Mountaineers and first-year Head Coach Shawn Clark.

“One of the best settings in college football just got even better,” said App State associate A.D. for internal operations John Welch. “We are committed to providing a world-class experience for our student-athletes, which includes the surfaces on which they train and compete for championships. We are excited to partner with AstroTurf on this beautiful new playing field at Kidd Brewer Stadium.”

With the Kidd Brewer Stadium installation, App State will have replaced over 350,000 square feet of old turf with AstroTurf®. In addition to the synthetic turf upgrade, the field is 20 percent larger and includes a new end zone facility.

The new field design includes a sharper end zone aesthetic, with "App State," the school’s popular name, replacing the "Appalachian" end zone. The "A" symbol at mid-field is a dark black with a contrasting gold outline, the same color combination used to outline the new field. To create much-needed space for a full end zone facility, the track was removed and will be relocated to another campus location.

The new AstroTurf® consists of Trionic fibers, an advanced fiber blend purpose-built to deliver a better experience for players. The fibers are made from polyethylene (PE) molecules fused with nylon to achieve an unprecedented durability level while retaining the non-abrasive texture modern PE fibers are known for.

App State chose the AstroTurf® 3D3 infilled turf system, which offers grass-like traction and superior stability. As the former field was nearing the end of its serviceability, this is an important improvement for the players, who have a promising year ahead. The 2020 roster includes more than 20 seniors.

App State Football competes in the Football Bowl Subdivision (FBS) and the Sun Belt Conference. The program has an incredible legacy, winning three straight FCS national championships in 2005 to 2007, making the Mountaineers the first Division I School in the modern era to win three consecutive undisputed national titles. Since transitioning to the FBS level, the Mountaineers have played in, and won, five consecutive bowl games and captured each of the last four Sun Belt league titles.

App State Football has set its first scheduled game for September 12 at Kidd Brewer Stadium against Charlotte, which will be the team’s first chance to experience its new home turf.